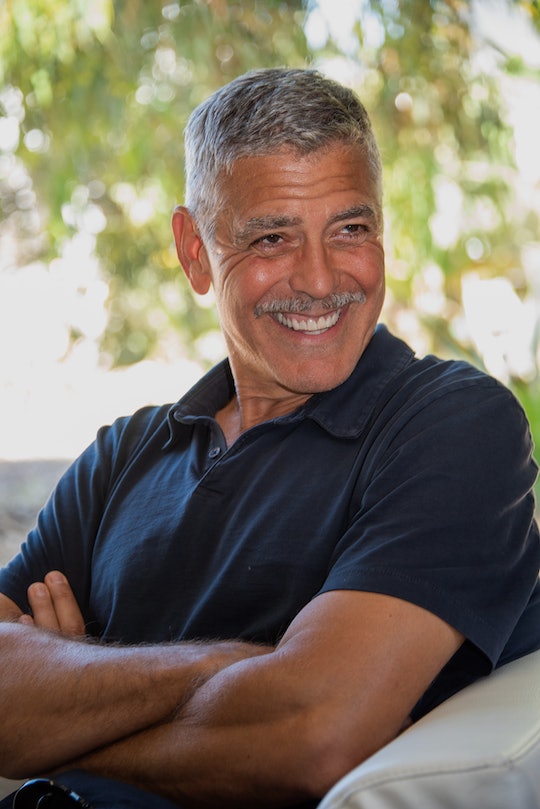 This is a time-honored Christmas trick.

As Christmas looms large on the horizon, it gets tougher and tougher for kids to stay calm and behave themselves. Which in turn is super stressful for parents who have enough on their plates over the holiday season. We need to be here for each other, support each other, and above all else, share our best little tips and advice so all parents can survive the holiday season with their kids. With that in mind, please read on for George Clooney's Christmas hack to keep his twins in line over the holidays. He might have come a little later to parenting than some, but he is making up for lost time by becoming a real parenting prodigy.

The Oceans 11 actor is dad to 3-year-old twins, Alexander and Ella, with wife Amal Clooney. He sat down for a virtual chat with Stephen Colbert on the Late Show on Monday night to promote his new film, The Midnight Sky, and also to give his fellow dad a behind-the-scenes look at his parenting style. Specifically during the holiday season. As Clooney explained to Colbert, "I've devised a way to get them to behave. When they're asleep in the morning and they start to make noises... and you can hear the two of them getting at each other or something, and I stand outside their door, and I go, 'Oh, hey, hi, Santa.'

I don't want to steal Clooney's thunder or anything... but he is definitely not the first parent to invoke the power of Santa Claus over the holidays.

George Clooney invokes the power of Santa to keep his kids in line.

That being said, Clooney did take his Santa involvement to the next level by pretending to have an entire conversation with the big man in red and even impersonating him, "And then you hear Santa is there and he's like 'Ho ho ho!,' he said, doing his best impression of Santa. And I say, 'What are you doing here, Santa?' and he says, 'Oh, I'm just making sure that the kids are being good kids.'"

While there might be some parents who think it is a little unfair to trick smal children, please know that Alexander and Ella will often speak Italian in front of their dad as a "secret language" since he can't understand them. So making them believe he is speaking to Santa does seem rather justified, don't you think?