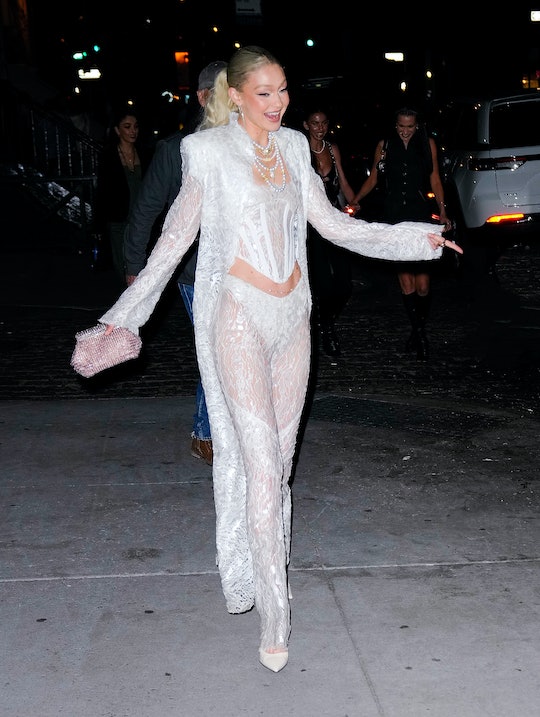 Serious question: How does one get an invite for next year?

Supermodel Gigi Hadid and mom to 20-month-old baby Khai just turned 27 and lit up the Big Apple in blazing style with a slew of celebrity friends. While the crowd at hot spot, Zero Bond, was no doubt packed with A-Listers, Hadid’s birthday party was essentially a star-studded moms’ night out. Blake Lively, Emily Ratajkowski, and Martha Hunt all came out to turn up with their catwalking pal for a pretty epic night on the town.

The birthday girl clearly stole the show with a white lace corset, matching long coat, sheer pants, and gobs of pearls. Hadid, of course, left little baby Khai at home, hopefully cozy and sound asleep at the Pennsylvania farm or Manhattan pad. Known for being a protective mama, Hadid has been very outspoken about fighting for the privacy of her daughter that she shares with singer and ex-boyfriend, Zayn Malik.

Hadid’s tumultuous break-up with Malik has been widely reported, so she definitely deserved a drama-free, fun birthday bash with friends. And from the looks of it, she was off to a sparkly start as Hadid and her glam mom squad transformed the sidewalks of New York City into a bonafide runway.

Yolanda Hadid, the OG Mom (and reason Gigi exists), also made an appearance and was a monochromatic vision. The stunning 58-year-old, who also raised children Bella and Anwar, looked elegant as ever in an all-beige outfit, hand-in-hand with her boyfriend, Joel Jingoli.

The former top model, who went through a very public split from musician David Foster, doesn’t just look fierce, she’s a phenomenal role model for her daughter post break-up. And as evidenced by her birthday party invite list, Hadid always has a solid friend group to commiserate with, whether that’s relationships or motherhood.