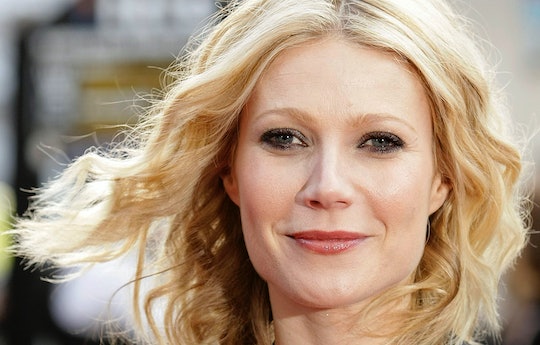 "She just prances around the bathroom, putting on her millions of Goop Glow products for her glowing skin."

Apparently the Gen Z roasting of older people on TikTok goes beyond middle parts and skinny jeans. Now at least one of them has marked Goop as their next target. Gwyneth Paltrow’s daughter Apple teased her in a hilarious video about her morning work routine in a move that was absolutely peak TikTok.

The Goop founder’s 16-year-old daughter Apple, who she shares with ex-husband Chris Martin, recently took to TikTok to share her mom’s morning routine. The healthy lifestyle guru is seen in the video taking her Goop Glow Morning Skin Superpowder first thing in the morning, “And she eats nothing except for dates and almond butter, so she will have that," Apple explained. "I suppose the Goop Glow is a part of her cleanse, which she's been on since... the day I was born, apparently."

The video follows a smiling Paltrow into the bathroom early in the morning, “It's 8 a.m., and she's been doing this since 7 a.m.," Apple said. "She just prances around the bathroom, putting on her millions of Goop Glow products for her glowing skin."

It’s more than just prancing and Goop Glow products for Paltrow, however. She also has to sit down to get to the business of “making some more vagina eggs,” which are small balls Goop sells meant to be inserted into the vagina to apparently help the uterus from sagging (although it should be said scientists have yet to support this claim).

Regardless, Apple says her mom is all about selling “just everything vagina,” which includes “vagina candles, and vagina perfumes.”

Apple Martin roasted her mom on TikTok for her morning routine.

Apple, who is big sister to 14-year-old brother Moses as well, was clearly roasting her mom in good fun. I mean, the video was shared on Goop’s official TikTok with the message, “when you get roasted by your gen z daughter” after all. Paltrow also went on to share a lovely black and white photo of herself with Apple with the news that her daughter was helping with an “exciting new product launch today featuring one of the absolute loves of my life.”

While the TikTok video was very tongue in cheek, it was also very on trend. Gen Z TikTokers have been in the news recently for mocking side parts and skinny jeans, two beloved mainstays of older generations like Gen X and millennials. As a 16-year-old, Apple knows what’s up with Gen Z. So why not bring her Gen X mom up to date?