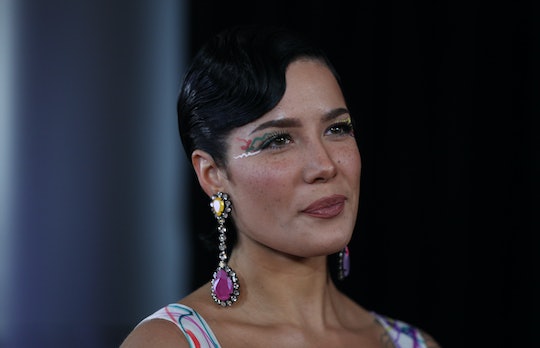 “This album is a concept album about the joys and horrors of pregnancy and childbirth.”

Halsey, who will soon welcome her first child, released the gorgeous cover art for her upcoming album “If I Can’t Have Love, I Want Power,” on Thursday. In it, the pregnant singer is sitting in a throne wearing a long dress and a crown with a baby on her lap, her breast exposed. The art is meant to represent “the joys and horrors of pregnancy and childbirth,” something that she said captures her own journey to parenthood.

Back in January, Halsey announced that she was expecting her first child with boyfriend, writer and producer Alev Aydin, with a series of maternity photos on Instagram. “Surprise!” she captioned the post. The singer had previously experienced a miscarriage in 2015 that left her feeling “inadequate,” as she told The Guardian in 2020. “Here I am achieving this out-of-control life, and I can't do the one thing I'm biologically put on this earth to do,” she shared with the publication. “Then I have to go onstage and be this sex symbol of femininity and empowerment? It is demoralizing.”

Now Halsey is using her album cover to confront that idea. “This album is a concept album about the joys and horrors of pregnancy and childbirth. It was very important to me that the cover art conveyed the sentiment of my journey over the past few months,” she wrote on Instagram on July 7. “The dichotomy of the Madonna and the Whore. The idea that me as a sexual being and my body as a vessel and gift to my child are two concepts that can co-exist peacefully and powerfully.”

The “Without Me” singer added in an Instagram post that “this image is my means of reclaiming my autonomy and establishing my pride and strength as a life force for my human being.” But it’s about more than just her personal journey. “This cover image celebrates pregnant and postpartum bodies as something beautiful, to be admired. We have a long way to go with eradicating the social stigma around bodies & breastfeeding. I hope this can be a step in the right direction!”

Certainly Halsey’s social media followers seem to agree that this is a step in the right direction. While most of the comments fell into the stunned “Wow”and “iconic” category, there were some who wanted to thank the singer for the powerful message. “As a breastfeeding mother and breastfeeding advocate, this message (written and pictured) brought tears to my eyes. Thank you for helping to normalize breastfeeding in such a powerful way, it means the world to other breastfeeding mamas!!!!”

Normalizing breastfeeding, pregnant and postpartum bodies, and harnessing the power of being both a sexual being and a vessel for a baby in one photo. That really is as iconic as it gets.