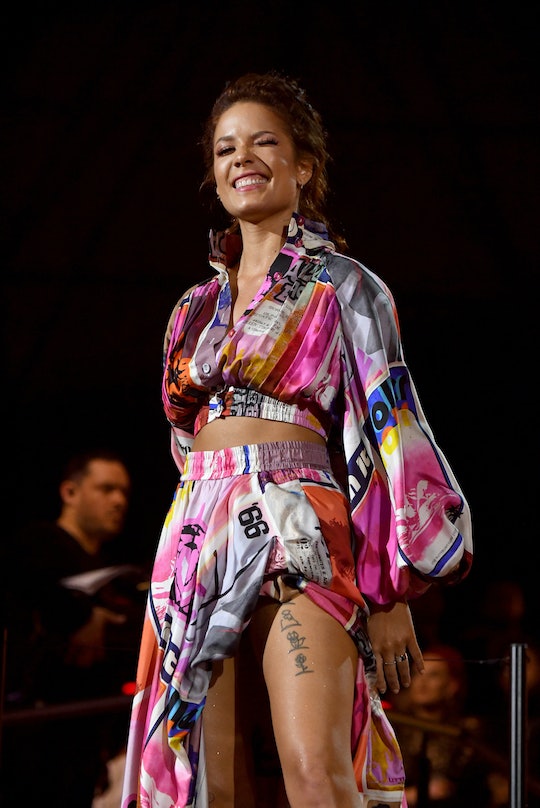 It’s just as colorful as the new mom.

Just weeks after giving birth to their first child, Halsey is now giving people a glimpse at their life as a new mom. In a series of photos on Instagram, the “Without Me” singer gave a look inside her newborn’s nursery.

The musician posted a number of photos to Instagram over the weekend all centered around their newborn, Ender. The first photo gives a glimpse at a gallery wall of the nursery, showing Ender’s name written out in colorful paint, alongside a number of hand drawn pictures, a Ponyo poster, a neon rainbow, and something called a “feel good worm.” “Pet this worm when you’re feeling sad and pretty soon you’ll be feeling glad,” the picture on the wall reads.

It’s only fitting that Ender’s nursery is decorated in a rainbow theme; Halsey has stated that Ender is her rainbow baby after suffering a miscarriage in 2015. She revealed this past January that she was expecting her first child with writer and producer Alev Aydin, and gave birth to Ender on July 14. “Gratitude,” they wrote in the caption of the birth announcement. “For the most ‘rare’ and euphoric birth. Powered by love.”

Halsey also gave her fans a glimpse at Ender, looking adorable in a rainbow onesie.

Halsey’s Instagram post also featured a photo of their stretch marks, which had people in the comments applauding the singer. “Wear those tiger stripes proud mama!,” one commenter wrote. “Love to see it!” “THANK YOU FOR POSTING YOUR STRETCH MARKS!!,” another commenter added.

This isn’t the first time that Halsey has given a glimpse into her life as a new mom. Just weeks after giving birth to Ender, Halsey posted a photo of them breastfeeding outdoors. “#worldbreastfeedingweek,” she captioned the post. “We arrived just in time!”

Between the glimpses of her life as a musician and as a mom, Halsey is giving fans a look at all of the tiny, real moments.