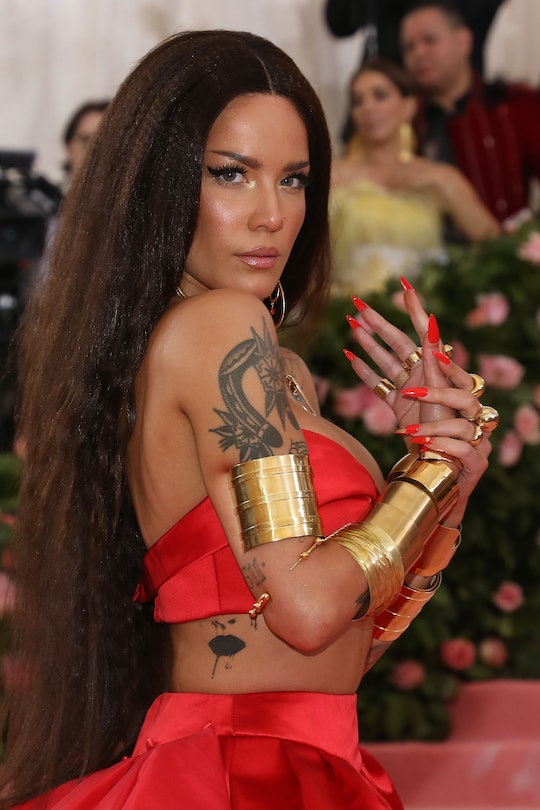 “Postpartum does not discriminate.”

The Met Gala came back in 2021 with a vengeance. Celebrities like Kim Kardashian West and Simone Biles dressed up in intricate gowns for one of the most glamorous fundraisers on the planet at the Metropolitan Museum of Art's Costume Institute in New York. Halsey, however, was missing from the red carpet and they’re absence was noticeable. On Monday, the new mom opened up about skipping the Met Gala in a series of since-deleted tweets that highlighted the expectations people often put on new parents to get back out into the world, whether they are ready or not.

Halsey and Alev Aydin welcomed baby boy Ender Ridley in July. In the seven weeks since, the singer has shared sweet photos of her life as a new mom. Breastfeeding in the park, his new nursery, even a fun “mom and dad” date night with Aydin. But it seems attending the Met Gala, which is famous for over-the-top, heavy gowns and hours of posing for photographs, was simply a bridge too far for Halsey.

When a fan asked on Twitter why they didn’t attend the Met Gala, Halsey responded, “I’m still breastfeeding <3 I only had my baby 7 weeks ago. There’s nothing more ‘American fashion’ than moms having to go back to work after just giving birth lol.”

While the singer didn’t owe anyone an explanation, she was generous enough to elaborate for her disappointed fans, “I wouldn’t have had a way to pump my breasts which would have been insanely painful,” she explained on Twitter. “I understand I’m incredibly privileged to afford time off but the demands are still prevalent and the biology does not excuse me.”

Halsey, who did attend the 2019 Met Gala, went on to point out that their body is still healing from childbirth, “I got leaky hurty boobs, a bloody swollen uterus, and a human being that depends on me as a life force,” even as they acknowledged their privilege for being able to stay home with Ender in the first place when met with some criticism from fans. “I am so grateful. For my baby after everything I went through to get pregnant. For my undeserved comfort to spend time home. For the blessing to make art as a form of employment. But postpartum does not discriminate. That’s all I meant to say.”

Plenty of fans supported Halsey’s right to opt out of the demands of attending the Met Gala in favor of staying home with her baby. “There is truly nothing more iconic or superior than Halsey not going to the vmas or met gala & just choosing to spend that time with family & her partner,” wrote on social media user. “Their power & growth is beautifully inspiring.”

Giving birth and becoming a parent changes everything, especially perspective. Being kind to their body and their mental health and understanding they have the right to say no to events that feel too strenuous is exactly the right message for Halsey to share with other new parents. Even if it’s the Met Gala.