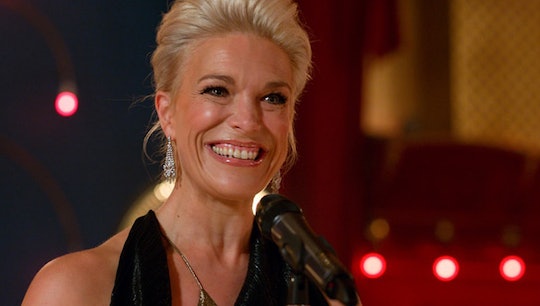 The Ted Lasso star is a proud mom of one.

One of the most anchoring characters on Apple TV+ Ted Lasso is Rebecca Welton, the cynical-yet-vulnerable owner of AFC Richmond. Played by actress Hannah Waddingham with equal parts warmth and icy precision, Rebecca is arguably the character who keeps Lasso’s hyper-positivity from grating on the audience’s nerves. Waddingham plays Rebecca with real humanity, with real insecurities and mistakes and a love of Ted’s secret shortbread cookies that resonates so well, she earned herself not just one but two Best Supporting Actress Emmy nominations. She won an Emmy in 2021, and do you know who will be there to cheer her on if she wins again? Her family. Here’s what you need to know.

She’s been with her partner for more than a decade.

Waddingham and her partner, hotelier Gianluca Cugnetto, have reportedly been together for more than a decade. According to Cugnetto’s LinkedIn profile, he is a food and drink guru who specializes in “luxury customer service” experiences at hotels in places like Dubai, Cyprus, and the Maldives. In other words, exactly the kind of man Rebecca Welton would like to meet in Season 2 of Ted Lasso. Especially since Cugnetto shares articles about Waddingham on his Facebook page as a way to show his support.

Her worry about her dad inspired one of her most iconic Ted Lasso scenes.

Ted Lasso fans remember Rebecca singing “Never Gonna Give You Up” at her father’s funeral in Ted Lasso. Well, it turns out, the heavy emotions from the scene stemmed from Waddingham’s real-life worry about her father, who had gone in for surgery that day. “Not many people know this, but my own father, that day, was having emergency quintuple bypass surgery,” Waddingham said in July. “And I had said goodbye to him that morning, not knowing whether I would ever see him again.”

Fortunately he was okay, so we don’t have to feel bad about loving that scene.

She has a daughter named Kitty.

Hannah Waddingham is a mom.

In 2016, Waddingham and Cugnetto welcomed their only child, a daughter. Their daughter is named Kitty, and the pair once took her to see the Teletubbies in concert together.

When Waddingham won her Emmy in 2021, she thanked Ted Lasso series co-creator Jason Sudeikis for changing her life... and more importantly, her “baby girl’s.” As Waddingham went on to explain to Ellen DeGerenes, her daughter Kitty suffered from Henoch-Schönlein purpura, a disorder that makes blood vessels swell, when she was younger. Which had Waddingham needing to work closer to home; two months after putting it out to the universe, she won the role of Rebecca, which made work just 30 minutes from her home.

She struggled with fertility.

Hannah Waddingham has a daughter.

When Waddingham shared her pregnancy back in 2015 with HuffPost, she admitted she had struggled with fertility issues, “I don't mind saying it, I know plenty of women go through it, but they kept telling me that my fertility was so low and that it might not happen. It's incredible how it hits you suddenly. It's taken my breath away; I’m so pleased.”

She takes her daughter on set.

Hannah Waddingham is a working mom.

When her daughter was still a baby, she joined her mother on the set of Partners In Crime. While her daughter is older now and presumably in school, it’s nice to think of her visiting the set of Ted Lasso and soaking up some of those positive vibes. Especially between Keely (Juno Temple) and Rebecca.

More Like This
Gabrielle Union Admits She May Be Becoming A Bit Of A Dance Mom With 3-Year-Old Kaavia
Exclusive: Watch Hayden Panettiere Talk About Addiction Treatment 4 Months Postpartum
10 Parenting Lessons From Abbott Elementary That You'll Want To Write Down
Kylie Jenner Is Unbothered By A Little Breast Milk Leaking On Her T-Shirt