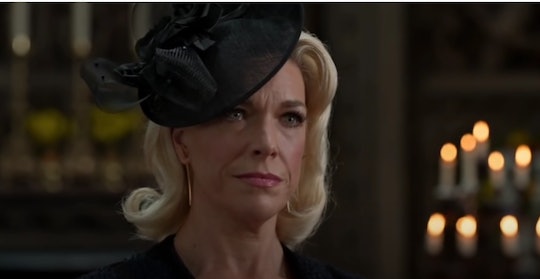 “I had said goodbye to him that morning.”

Fans of Ted Lasso on Apple TV+ will remember an especially emotional episode from Season 2 called No Weddings And A Funeral. Rebecca Welton, played by Emmy award-winning actress Hannah Waddingham, loses her father and has to give a eulogy at his funeral. It’s an incredibly sad episode, and apparently it was especially difficult for Waddingham herself to film. Because she was going through something far too similar in her own life.

The day that Ted Lasso cast and crew were filming the episode, Waddingham’s own father was dealing with a very real health scare. “Not many people know this, but my own father, that day, was having emergency quintuple bypass surgery,” Waddingham told E!. “And I had said goodbye to him that morning, not knowing whether I would ever see him again.”

While it was certainly difficult for her, Waddingham called that episode “the greatest gift” of her career. And admitted that she found comfort in filming it. “It's something that I'll never forget, the distraction that I had,” she added. “There was a certain amount of catharsis in being able to release on camera, because had I been shooting a day where she was meant to be sassy or bold or boss a-- b**ch or whatever, I would have probably struggled more.”

Instead, Waddingham was able to play a vulnerable Rebecca, conflicted about the loss of her dad because of her complicated relationship with him. When it’s time for her to get up to deliver her eulogy, she falters at first. Then draws strength from her AFC Richmond friends, including Ted Lasso (Jason Sudeikis) himself. They all end up spontaneously joining her as she sings Rick Astley’s “Never Gonna Give You Up,” and it’s a cathartic moment to see her supported by her friends.

Just as she was behind the scenes. Waddingham told Deadline that her father had been rushed to the hospital by ambulance and was scheduled for surgery when she was filming that pivotal scene. “And then the day I finally knew they definitely were going ahead with my dad, I was standing in front of Rebecca’s dad’s coffin doing the eulogy. And this lot on that day! My God. Did I feel I had a group of pals holding me up? It was incredible.”

Her dad is well now. And Waddingham has been nominated for a second Emmy for her performance as tough and tender Rebecca Welton. So all turned out as it should.