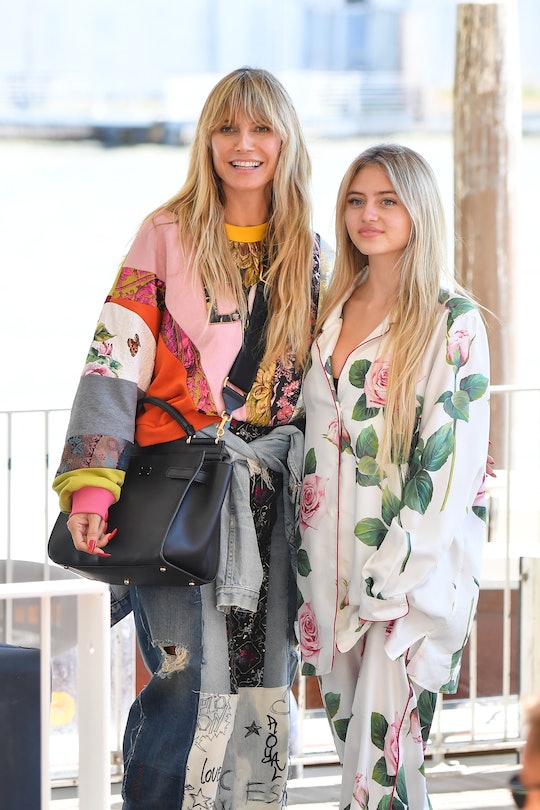 Back in the ‘90s, model Heidi Klum wore a simple strapless black dress to a Comic Relief event and looked stunning. Just as stunning as her 18-year-old daughter Leni Klum looked when she wore the exact same dress to her prom 20 years later. Leni must be pretty happy that her mom is holding on to her ‘90s clothing because, of course, it’s all coming back.

Klum’s oldest daughter Leni took to Instagram on Monday to share some snapshots of her prom look. She left her hair down long, kept her makeup and jewelry quite simple and natural, and really let her mom’s vintage black strapless dress shine. The dress was first worn by Klum in 1998 at a Comic Relief event, and unlike some other fashion looks from the ‘90s, it’s aged exceedingly well.

Of course, it doesn’t hurt that Leni inherited her mom’s genes as well as her clothes and, as a model herself, knows how to pull a look together. Leni captioned the post, “prom night in mama’s dress.”

Leni’s rewear of her mom’s dress earned a heart eyes emoji response from the Making the Cut host, of course.

Klum’s daughter, whose biological father is Italian entrepreneur Flavio Briatore and whose full name is actually Helene, has been following in her mom’s footsteps with more than just her prom dress. The 18-year-old is now a model, something she told Extra she has wanted to do since she was 11 years old and watching her mom at work. “I had grown up going to work with my mom… Ever since 11 or 12 years old I’ve been begging her and then finally I turned 16 and she said that I could finally start modeling.”

Klum couldn’t be prouder of her daughter’s modeling career, telling People in 2021, “She's not really afraid of the cameras being stuck in her face. I do Germany’s Next Top Model and she's done a lot of the shoots the models had to do. A lot of the times at the end of the shoots, she would be like, 'Now it's my turn!' off camera. She's done so much over the years, she loves it. She loves it!”

She also clearly loves her mom’s dress, so much so she pulled it out for what is arguably the biggest celebration of high school; prom night. Lucky girl.