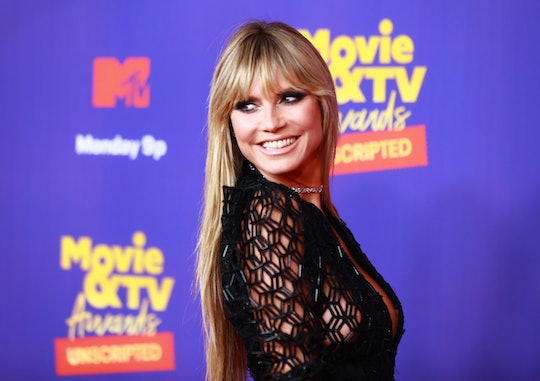 Does anyone love Halloween more than Heidi Klum? No. The answer is obviously no. The mom of four has a reputation for taking the spooky season seriously for years. This year, some might even say she’s taking it deadly serious. Because Heidi Klum made a Halloween movie with her kids that is all about the undead munching on the living, and she’s never looked more in her element.

The America’s Got Talent judge is mom to four kids, 17-year-old daughter Leni, 15-year-old son Henry, 14-year-old son Johan, and 12-year-old daughter Lou who she co-parents with ex-husband Seal. In the past, Klum has hosted epic Halloween parties complete with intricate costumes that almost defy description, they’re so detailed, but the past two years have of course been a bit different. Last year, Klum released a gory short horror film featuring her husband, Tom Kaulitz and her kids, telling People, “With lockdowns around the world this year, no Halloween parties or trick-or-treating, I knew I wanted to do a fun project at home with my family so I came up with the idea of shooting a short horror film that we could all star in.”

It seems they had so much fun, they decided to go for round two in 2021. And why not add a dash of zombie cannibalism into the mix?

Klum shared the 7-minute video on Instagram along with the caption, “Normally I’d be hosting my annual Halloween party on Sunday night … but this year things are still looking a little different. So instead, my family and I want to be the first to wish you a safe and spooky Halloween weekend.”

The movie sees Klum’s four kids watching television and mourning the loss of their dead mother and wishing she could have one more Halloween, even as the newscaster explains that the dead are all rising from their graves. A knock sounds at the door, and a zombie Klum is there calling out “Here’s Mommy!”

The family deals well with her return, though. Feeding her human body parts and just sort of rolling with her new normal (her ear falling off when she tries to wear earrings is especially gruesome). Even when she vomits pea soup into her son’s face, they look like they’re having a great time together.

As ever, Klum sets the barre for Halloween just a little too high for us mere mortals. Now it’s not enough to just go trick-or-treating with your kids. If you follow in Klum’s footsteps, you need to make an arthouse short horror film.

Someone get a script together for 2022.

More Like This
The Best Valentine’s Day TV Episodes For Kids
Freeze! The Single From The New 'Bluey' Album Just Dropped
Marie Kondo Gives Up Tidying Post-Kids, Sparking Joy For Moms Everywhere
Sally Field Is The Ultimate Cool Mom Who Once Tried To Set Her Son Up With An Olympian
What Parents Are Talking About — Delivered Straight To Your Inbox