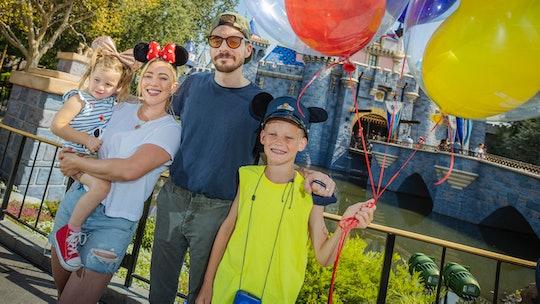 Such is life with a toddler.

There’s nothing more entertaining than a 3-year-old ready to spill the tea on their family’s deep, dark secrets. For everyone but their parents, obviously. It’s not always super fun for the parent whose stories are getting told. Just ask Hilary Duff about the time her 3-year-old daughter Banks told her soccer coach that she had diarrhea. I’m fairly certain that was a story she wasn’t about to share with the coach. I’m also sure that coach thought it was extremely hilarious.

Duff took to her Instagram Story on Monday to share a bit of a public service announcement for parents. “Whoaa, don’t trust your kids!” she wrote on Instagram. “Home girl ousted me to the soccer coaches!” The Lizzie McGuire actress, who is mom to 10-year-old son Luca, 3-year-old daughter Banks, and 1-year-old daughter Mae, went on to share a text she received from her assistant about her 3-year-old really opening up about her home life at soccer camp. “Banks told a story at camp… ‘my mom made bad chicken and now she has diarrhea…that’s what happens when you make bad chicken,’” her assistant Lauren told her. Did Banks feel remorse about sharing this personal tidbit with her coaches? Not according to the next photo Duff shared of her grinning like the happiest girl in the world on a swing. “The rat,” Duff captioned that photo.

Duff is no stranger to her kids embarrassing her, although it bears noting that diarrhea is nothing to be embarrassed about. Nor is making bad chicken, we’ve all made bad chicken. As a mom of three kids, she does appear to be developing a much-needed thicker skin to the more embarrassing elements of parenting. Like taking 1-year-old daughter Mae on a flight with husband Matthew Korma, for example. Duff documented Mae’s transformation into a “caged animal” throughout the flight to Hawaii on social media, where she became “unhinged” for seemingly no reason whatsoever. “She was the naughtiest baby — and before I hear all the comments, about like, 'Oh, it's her ears or her teeth.' No. Nope. She was perfectly fine,” Duff said at the time. “But she has found this new level of volume when she screams.”

So she’s dealing with one toddler spilling her secret diarrhea moment and another screaming her lungs out. Parenting is total bliss, right?

More Like This
Kylie Jenner Reveals That Her Mom Kris Basically Delivered Stormi
Nick Cannon Announced The Birth Of His 9th Child, A Daughter Named Onyx
Amanda Seyfried Tells Her Daughter To Go To Bed After Emmys Win
Ben Stiller Hit The Emmys Red Carpet With His Daughter Ella