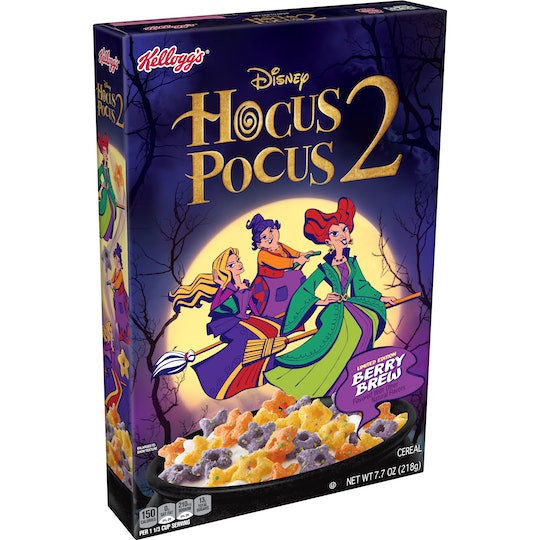 Grab your broom and spoon!

Witches and breakfast fans, rejoice! Just in time to get you ready for Halloween season, one of your favorite spooky movies is back with a sequel! And to celebrate, Kellogg’s has announced it’s releasing a Hocus Pocus 2 potion-inspired cereal called “Berry Brew” in select retailers this August.

By the looks of the nostalgic trailer that dropped on Disney+, Hocus Pocus 2 is definitely worthy of the high honor of a cereal to simultaneously munch on while streaming. The original movie, which starred Sarah Jessica Parker, Bette Midler, and Kathy Najimy is a cult classic from the ‘90s (and a great choice for a family-friendly flick to get you in the mood for fall). All three actresses are back for the sequel in which the child-hungry Sanderson witches are accidentally brought back to life by a trio of young women in Salem, Massachusetts.

“Disney’s Hocus Pocus has been a part of family Halloween traditions for years. Now, with Kellogg’s Disney Hocus Pocus 2 cereal, families can celebrate spooky season alongside the Sanderson Sisters as they return on Disney+ this fall,” Sadie Garcia, director of brand marketing at Kellogg’s, said in a statement.

In a recent Instagram post, Kellogg’s announced the exciting and delicious cereal tie-for the highly-anticipated film. “The Sanderson Sisters are back✨🎃 🕯.Don’t miss out on our limited-edition Disney Hocus Pocus 2 Berry Brew cereal available later this month in select retailers. Be sure to watch Hocus Pocus 2, an Original movie event, streaming September 30 on @disneyplus ! Rated PG © 2022 Disney+ subscription required. 18+ to subscribe,” Kellogg’s captioned the post.

Twitter is unsurprisingly vocal about the cereal. According to the lofty authority of dadbodsnacks (who, according to his bio, is “a dad with a dadbod, that enjoys snacks a little too much”), Hocus Pocus 2 cereal lives up to the hype: “There’s 2 Halloween cereals that MUST be on your list this #SpookySzn. @kelloggsus Rice Krispies in glorious orange AND @disney Hocus Pocus 2 cereal. I don’t think you can get any more halloweenie…Is that a word? Can we verb the holiday Halloween? ID…,” the snack-a-holic tweeted.

Another hungry dad on Twitter, @AStayAtHomeRad, chimed in as well. “Gotta give the people what they want,” he tweeted.

The Disney Hocus Pocus 2 cereal will be available for a limited time in August for a suggested retail price of $4.29 for a 7.7-ounce box and $5.29 for a 12-ounce box. So grab your book of spells and favorite cereal bowl, and dive into a movie snack that’s both wicked and sweet!

More Like This
Here's Where The 'Hocus Pocus' Characters Are 30 Years Later
'Hocus Pocus 2' Gives Us A Glimpse Of The Sanderson Sisters As Kids
Witchy Vibes, Salty Language, & More: What Parents Need To Know About Hocus Pocus 2
Leonardo DiCaprio Nearly Had A Role In 'Hocus Pocus' & More Fun Facts You Didn't Know