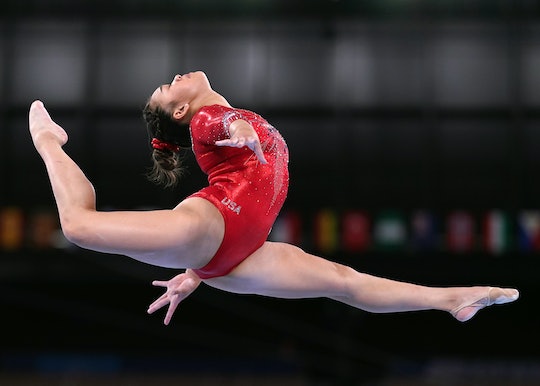 There are multiple hidden expenses to factor in.

If your little one was inspired by all the sick flips, record smashing times, and sparkly outfits currently on display at the Tokyo Summer Games, you might be wondering how much it costs to compete in the Olympics. While it certainly varies depending on the sport, it's very rare for most top-level athletes to make enough in prize and endorsement money to sustain their careers without side jobs, community support, and some serious financial backing from their families. In fact, parents of Olympians routinely spend tens of thousands of dollars on their kids every year in some sports. And of course, that's on top of the $233,610 that it costs to raise a child through age 18, according to the U.S. Department of Agriculture. So the question is, how much does it cost to be an Olympian?

How Much Does Elite Gymnastics Cost?

When it comes to recreational gymnastics, the Aspen Institute’s State of Play survey found that parents will typically pay an annual average of $1,580 for their kid to train and compete. Some parents in the survey reported spending far more: in excess of $20,000 a year. This number comes from the combination of equipment, training, competition fees, and travel expenses that are necessary if your kid wants to compete in the upper echelon of gymnastics.

Competition leotards from leading gymnastics apparel company, GK Elite — which outfits Team USA with uniforms covered in up to 7,600 Swarovski crystals — generally cost between $200 and $400. Given that gymnastics competitions take place over a few days, each athlete likely has a few competition leos in addition to a wardrobe of practice leos, which cost between $60 and $200 each. When it comes to competing, there are entry fees for each meet, and travel expenses to get to and from the competitions alone can add up to a hefty sum. Additionally, the athletes must pay choreographers to put together custom floor routines with edited music, which can cost anywhere from $475 to $700 per routine in the elite levels of the sport.

Nurturing an Olympic-level gymnast also comes with investing in specialized, high-level training from an early age. Having access to a gym and club to train with for competitive gymnastics classes can cost about $200 to $400 per month, depending on the number of hours an athlete is training each week, according to Pinnacle Gymnastics. The Houston Chronicle reported that the average annual salary of a gymnastics coach in 2013 was $32,000, and recent data lists the highest annual salaries as $51,000, according to Simply Hired — but it’s important to note that the athletes’ individual families are required to fund a coach’s income.

Outside of the gym, parents of elite gymnasts will also be funding visits to physical therapists, deep tissue massages, and at-home equipment for the athletes to continue their training. Tokyo 2020 women's individual all-around gold medalist Sunisa “Suni” Lee’s father, John Lee, couldn’t afford a real at-home balance beam, so to make sure his daughter wouldn’t fall behind, he built a wooden beam in the backyard so that she could keep practicing outside of her gym training.

How Much Does Figure Skating Cost?

Figure skating, the most high-profile sport at the Winter Games (which will head to Beijing in 2022), is also one of the most expensive hobbies your kid can get into. It takes hundreds of hours of training to get to the Olympics, which comes with associated fees, and that’s on top of equipment, travel expenses, and a whole roster of professionals on retainer to help your kid become a champion in their sport. On average, the total annual cost to become (and remain) an elite skater is between $35,000 and $50,000, according to Money.

Olympic-level skaters usually train six days a week for hours at a time, and with that comes a $20 to $40 daily fee for access to the rink, and $65 to $120 per hour for coaching fees, Money reported after interviewing skaters’ families. A schedule like that makes attending public school impossible, so parents are also on the hook for a private tutor. It'll run you up to $100 per hour for a certified teacher, according to Care.com. Athletes looking to compete in the Olympics and other events will also need to hire a choreographer to create both their short and long skate programs, which adds another $1,500 to $5,000 for each. Most skaters also perform new routines every year. Some parents even shell out for ballet, ballroom dancing, or acting lessons for that extra bit of pizzazz to really sell the routine on the rink.

While top-tier skaters often score free skates through sponsorships, those who have to cover their own are looking at $1,000 to $1,500 for blades and boots, which generally wear out after a year of elite competition and training, according to Business Insider. And no look is complete without a hand-sewn costume dripping with crystals, as these days most skaters solicit high-end designers to create their glitzy looks (re: Nathan Chen wearing Vera Wang in PyeongChang), which can cost anywhere between $1,500 to $5,000, according to The Cut.

There are also travel expenses associated with competing at domestic and international events throughout the year, and it's not just airfare and a hotel room for you and your child; you'll also be expected to pay for the coach's travel, and make up for their lost wages while they're on the road with you. And finally, there are the medical bills, physical therapist visits, and sports massages skaters routinely need to stay in peak condition.

Costs obviously vary from sport to sport, with different expenses taking up the bulk of the price. For many winter sports, such as skiing and snowboarding, equipment is the biggest expense, followed by travel. Snowboarding prodigy and gold medalist Chloe Kim’s father spent six hours every week driving her to and from Mammoth Mountain Ski Area. According to the Aspen Institute, ice hockey parents pay the most overall on average.

Where Does The Money Come From?

While many countries pay their athletes' way for the Olympics, the United States doesn't. The governing bodies for certain sports provide some assistance, but only for the best of the best, and it's still only a fraction of what individuals end up having to pay themselves. Since Olympic athletes do have to pay for travel, many adult athletes have day jobs to help pay for their expenses, and parents are usually forced to take on additional work, second mortgages, or start GoFundMe campaigns to send their kids to the biggest international stage. As Zaileen Janmohamed, senior vice president of development and innovation of the U.S. Olympic and Paralympic Properties, told Forbes, about 60% of Team USA athletes don’t make enough on their own to support themselves full-time in their sports.

“Only the top 10, maybe 15, percent of our athletes are represented by an agent,” Janmohamed said. “The rest either don’t get any financial endorsements and don’t need an agent, are supported by a family member, or do it themselves.”

Former U.S. swimmer Missy Franklin’s parents told the New York Times that they spent upwards of $100,000 on swimming-related expenses in one year alone. And it's often still not enough: In the months before the 2012 Summer Olympics in London, gold medal-winning U.S. gymnast Gabby Douglas' mother, Natalie Hawkins, filed for bankruptcy, and the parents of her fellow gold-medalist, swimmer Ryan Lochte, were hit with a lawsuit from their mortgage lender that ended in the foreclosure of their home.

While elite gymnastics and skating may be some of the most pricey sports, none of them are cheap, and competing in a less high-profile one also means it's harder to make a living off of endorsements. Team USA sprint kayak athlete Shaye Hatchette, who didn’t end up making the Olympic squad, told Vice she has spent more than $35,000 in travel fees alone since 2018. Annually, she spends more than $38,000 in expenses. Hatchette says for sports that aren’t big ticket Olympic events, finding funding and sponsorships to supplement the price of training and competing can be difficult. Table tennis players can expect to spend $15,000 a year on coaching alone, never mind paddles (a good one can cost you more than $300) and international travel, and archery can cost the parents of an aspiring Olympian up to $25,000 annually, according to Forbes.

For 17-year-old Colin Duffy, who competes in sport climbing, a new event at the Olympics, the costs started racking up for his parents after he began excelling in the sport at the ripe age of 5 years old and lead climbing by the age of 8 years old, according to Climbing.com. He then started training at the esteemed ABC Kids Climbing gym in Boulder, CO, where the rates for summer camps can reach $395 for five days and $2,340 per season (not to mention the $432 assessment fee) to be a part of the elite training team for which he now climbs.

And what do athletes get in return? Well, if they win medals, a whole lot. While the International Olympic Committee doesn’t give out prize money, individual country organizations often do. The U.S. Olympic and Paralympic Committee, for example, rewards its athletes $37,500 for every gold medal won, $22,500 for silver, and $15,000 for bronze. For the majority of athletes, however, who compete at the Olympics but don’t earn medals, it’s a different story. Team USA javelin thrower Cyrus Hostetler told the Washington Post that the biggest profit he ever saw in one year was $3,000. Meanwhile, the coaches and directors of the governing bodies of sporting organizations usually make six figures.

So while the experience of seeing your kid reach the pinnacle of the sports world at the Olympics may be priceless, the cost of getting them there definitely comes with a price tag. In some cases, it might be better to stick with tee-ball, or better yet, if you want to keep their Olympic dreams alive, skateboarding — after all, it only requires a board and a helmet.

This article was originally published on Feb. 14, 2018