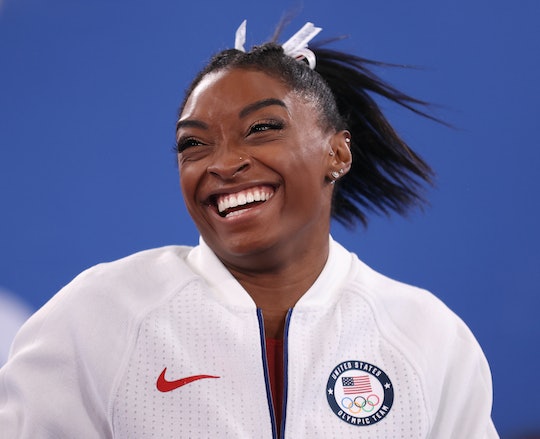 How To Send Fan Mail To Simone Biles, Because She Deserves All The Praise

Write to the GOAT Olympic Gymnast and give her your support.

In 2018, four-time Olympic Champion, 19-time World Champion and seven-time National Champion gymnast Simone Biles took a giant leap for professional athletes —specifically women athletes — when she spoke up about the sexual abuse that she and so many others suffered at the hands of USA Gymnastics doctor Larry Nassar.

And in 2021, she took another giant leap at the Tokyo Olympic Games when she bowed out of the team finals and the individual all-around competition for medical and mental reasons. This showed athletes across the world that they should have a say in their bodies and their mental health. She normalized the word “no,” which is so important for people in the public eye. So we should absolutely send Simone Biles fan mail, guys, because I have a feeling she’s going to want to see the support that we all still have for this GOAT Olympic gymnast.

When she withdrew, Biles had done something that no other Olympic gymnast has been able to do in the past, even the greats like Dominique Moceanu or Kerri Strug. Unlike Moceanu and Strug (because they weren’t allowed to), Biles stood up for her mental and physical health and took a step back after she said she was suffering from a case of “the twisties.”

What Are The Twisties?

The “twisties” is a term in the gymnastics world that means you have a mind-body disconnect when you’re performing. And it’s incredibly risky when you’re performing skills that are as dangerous and difficult as Biles’. It’s like your muscle memory is there, but you mentally aren’t a participant.

A Washington Post article explained, “The twisties are essentially like ‘the yips’ in other sports. But in gymnastics, the phenomenon affects the athletes when they’re in the air, so the mind-body disconnect can be dangerous, even for someone of Biles’s caliber.”

Biles says in an interview with NPR that she didn’t get physically injured, thankfully. “And that's why I took a step back, because I didn't want to do something silly out there and get injured. So I thought it was best if these girls took over and did the rest of the job — which they absolutely did, they're Olympic silver medalist now. And they should be really proud of themselves for how well they did last-minute, having to [adjust].”

In case you weren’t aware, in the ‘96 Olympics in Atlanta, Moceanu and Strug felt like they had to continue to push themselves to compete even though they both suffered catastrophic injuries.

Moceanu shared a tweet in full support of Biles, saying, “I was 14 y/o w/ a tibial stress fracture, left alone w/ no cervical spine exam after this fall. I competed in the Olympic floor final minutes later. @Simone_Biles decision demonstrates that we have a say in our own health — ’a say’ I NEVER felt I had as an Olympian.”

Moceanu continued in subsequent tweets, “In our sport, we essentially dive into a pool w/ no water. When you lose your ability to find the ground—which appears to be part of @Simone_Biles decision—-the consequences can be catastrophic. She made the right decision for the team & herself.”

And after Moceanu “crushed her head and neck,” as she tweets, not even Larry Nassar examined her, and she was expected to get back up there and do it again.

There’s a popular Facebook post from Byron Heath that went viral shining light on how Kerri Strug was basically forced to perform her second vault after breaking her ankle. She told her coach Bela Karolyi she couldn’t feel her leg, and he told her you have to shake it out and go one more time. The further injuries she sustained from this incident forced her to retire from her lifelong sport at 18 years old.

Kerri Strug offered Biles her support in her tweet saying “Sending love to you @Simone_Biles-Team UNITED States of America.”

And you can show your support as well, whether via Twitter like the Olympians or via snail mail.

Where To Send Fan Mail To Simone Biles

And she will more likely than not read your words, because Biles might be the top gymnast in the world right now, but she's super down to earth and has a family that keeps her grounded. The Biles are a very close-knit family and they've been her biggest support system. She was adopted by her grandparents after spending several years in foster care, and went to live with them when she was 6 years old — the same year she went to her very first gymnastics class.

On the Simone Biles page on USA Gymnastics, after the nearly quarter-page list of her staggering number of awards and wins, Biles shares some of her favorite things: in school, her best subject is History (fitting, since she's making it!), she loves Pretty Little Liars and The Hunger Games series, and when she's not in the gym, she's hanging out at the mall with her friends.

Well that, and responding to all her fan mail. She's been regularly reading and responding to fans for years, though she's probably a little bit busy right now, competing at the Olympics and all. But I’m sure she’d still be happy to hear the love, support, and encouragement from all of her fans around the world, especially with all the negativity and misunderstanding swirling around.

We love and support you, Simone! Thank you for taking a giant leap for female athletes and women around the world. You’re still the GOAT.

This article was originally published on Aug. 9, 2016