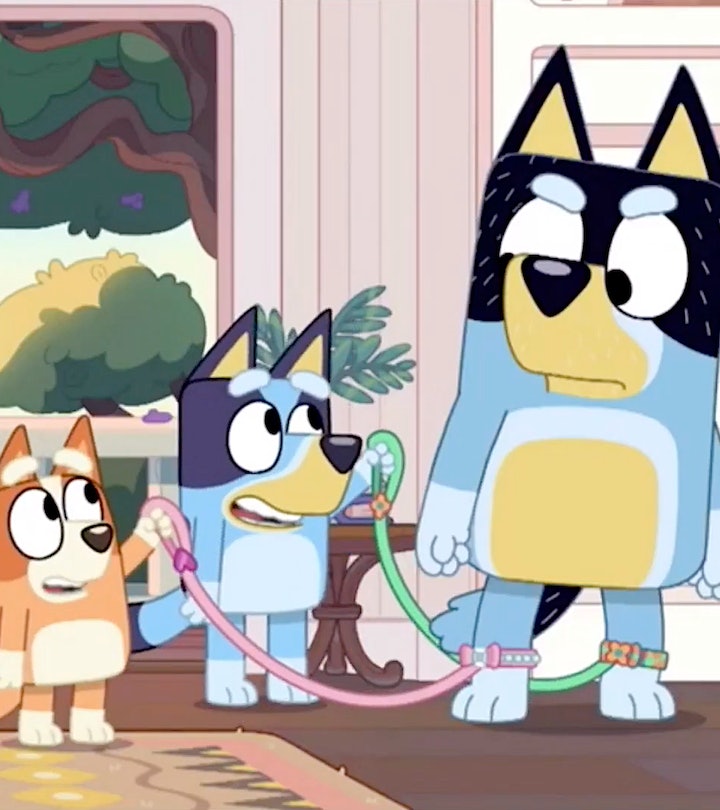 Here’s everything parents need to know to catch up with the Heeler family.

If your kids don't already know Bluey, Bingo, Bandit, and Chili from the sweet and silly Heeler family, consider yourself missing out. Sure, the Australian animated TV series Bluey is absolutely a hit among preschool-aged children, but its themes and subject matter have also captivated parents. That said, families in the United States have likely watched Season 1 again and again by now and thankfully, Season 2 of Bluey will also be available to stream in May 2021.

When Bluey first premiered in 2018, episodes aired exclusively in Australia on ABC Kids — that's the Australian Broadcasting Corporation, not the American Broadcasting Company. But as the show took off, it quickly became apparent that Bluey was a pup that kids all over the world would love. As a result, The Walt Disney Company purchased Bluey's international broadcasting rights in 2019, effectively bringing the Heeler family's hijinks overseas to viewers in the United States.

Where To Watch Season 2 Of Bluey

The second season of Bluey is coming to Disney+ on May 28, 2021, the show announced on Facebook. This season features a whopping 51 episodes, including one with Robert Irwin as a guest star!

Season 2 first premiered in Australia in March 2020 and ended with a Dec. 1 Christmas special. It then premiered on DisneyNOW, the Disney Channel, and Disney Junior in July.

If you don’t have Disney+, you can either tune into episodes as they air on Disney Junior — see the channel's full listings schedule here — or head on over to DisneyNOW. A number of episodes from Bluey's second season can currently be streamed for free on DisneyNOW; additional episodes can be watched after signing in with an eligible TV provider subscription. Fans can also catch episodes of Bluey's second season with a Hulu + Live TV subscription.

How To Catch Up On Season 1 Of Bluey

New and old fans of Bluey can catch up on the Heeler family's past adventures with Season 1 of the popular animated Australian series. All 51 episodes of the series' first season can be viewed for free at Bluey's official website or on Disney+.

What's Up With Season 3 Of Bluey?

In September, Perth Now reported the Australian Broadcasting Corporation had confirmed a third season of Bluey had been ordered. "We're so happy to be given this opportunity to make a third series of Bluey and look forward to working once again with the incredibly talented and hardworking team on brand new episodes," the news outlet reported Ludo Studio Executive Producer Charlie Aspinwall said in a statement.

It's unclear, however, when Season 3 of Bluey will be available to watch in the United States. For now, fans of all ages will have to keep busy watching Season 2 (and, let's be honest) rewatching Season 1 again.

More Like This
A Guide To Every Dog Breed In 'Bluey'
Netflix Has Lots For Families To Look Forward To This August
Exclusive: CoComelon Is Going On A Live Tour Across the U.S.
10 Of Bandit’s Funniest Dad Lines From 'Bluey'

This article was originally published on March 5, 2021