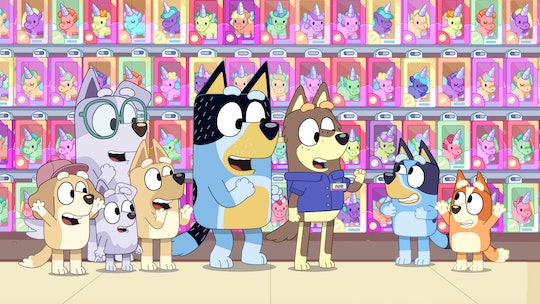 Just when you thought the adorable show from Australia couldn't get any cuter, there's now a new Bluey episode coming out featuring Robert Irwin. The son of late Crocodile Hunter Steve Irwin will voice a sweet pup named Alfie in the upcoming episode premiering on the Disney Channel and DisneyNOW on Feb. 26.

In "The Quiet Game," Irwin — who currently stars on the Animal Planet reality series Crikey! It's The Irwins — lends his voice to Alfie, a kind pup who works in a store and manages to save the day. Exactly the kind of positive content fans have come to expect from Bluey.

Irwin's appearance as a sunny, helpful pup on Bluey is really a perfect match for the Australia Zoo conservationist. The 17-year-old brother of Bindi Irwin is famous for being a true animal lover, whether those animals are the ones who inhabit the zoo or his own pet dog Stella, who's featured prominently on the budding photographer's Instagram page.

The young star shared the news that he was the voice of Alfie back in October before the episode first aired in Australia. "So happy to be part of this awesome Aussie production, hope you can watch," Irwin wrote on Instagram at the time.

Now this episode is on its way to American kids and you can take a sneak peek at Irwin as Alfie on Bluey in the adorable clip below.

Ever since Bluey hit the United States in 2019, it's been a massive hit. The good-natured Heeler family living in a suburban neighborhood of Brisbane, Australia is actually based on creator Joe Brumm's own family experiences. As most parents are well aware, Bluey is relatable, easy to watch, and sweet. It's no wonder Irwin was happy to lend his voice to the show.

Catch this new episode of Bluey on Friday, Feb. 26 on the Disney Channel (during the Disney Junior block) and on DisneyNOW.

More Like This
Three Adorable Wombats Learn To Solve Problems In PBS Kids’ New Show
Exclusive: Watch How A Group Of Princesses Save The Day In Netflix's New Animated Series
Watch An Exclusive Sneak Peek At 'The Amazing Maurice'
Freeze! The Single From The New 'Bluey' Album Just Dropped
What Parents Are Talking About — Delivered Straight To Your Inbox