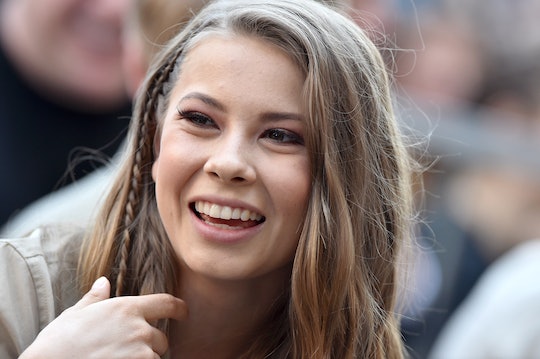 Just a few months after announcing her pregnancy news, Bindi Irwin shared her very first bump photo with the world and looked so excited to welcome her "incredibly energetic" baby girl. And best of all, the picture was captured by her mom.

"My beautiful mum took this photo yesterday," Irwin wrote alongside the first bump photo she shared on Instagram. "Baby girl is doing great," the mom-to-be captioned the photo. "Every time we get an ultrasound she’s incredibly energetic and always moving around."

The past year has been pretty exciting for the Australia Zoo conservationist. Back in March, she married her longtime boyfriend Chandler Powell at an intimate family ceremony. And just a few months later, the couple announced they're expecting their first child together. While it has been something of a whirlwind for Irwin, she did take the time to slow down and appreciate the news that she was going to be a mom when it happened. As she wrote in an Instagram post in September, "Reflecting on when we found out that we are going to be parents. Discovering that I was going to become a mother will forever be a moment where time stood still."

Of course, when Irwin shared her cute bump photo and gave fans a baby update, she related her daughter's size to an animal since she is a lifelong lover of all creatures. "She’s now about the same size as a mountain pygmy-possum. Too cute!" Irwin captioned her most recent photo. The mom-to-be had previously compared her daughter's size to that of a hatchling Aldabra tortoise in late September, so it's nice to see the theme continue.

Irwin's photo was a big hit with her social media followers, who wrote messages like "I still can’t believe you’re old enough to have a baby!! I remember watching you when you were little on your dad’s show! Your baby girl is going to have the most loving mama and dada." Another fan noted that Irwin's father, the late "Crocodile Hunter" Steve Irwin who died in 2006, would be excited to see his daughter pregnant, "You're just glowing, young lady. Your dad would be so proud."

Naturally, dad-to-be Chandler Powell was also pretty happy to see this image pop up in his feed. "She’s already growing up so fast and she hasn’t even arrived yet. I love you and our baby girl," he commented on the photo.

Powell and Irwin live and work at the Australia Zoo, alongside Irwin's mom Terri and her younger brother Robert, according to People. While their set-up might not be for everyone, it certainly seems to suit the couple. Especially since her mom is on hand to take fantastic bump photos for her. Definitely a perk.