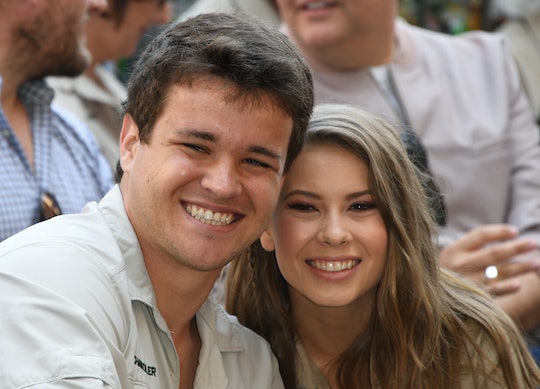 It's a moment indelibly etched on most parents' memories and Bindi Irwin, who announced she's pregnant with her first child last month, has shared hers. In a moving new post on Instagram, Irwin recalled the moment she found out she was going to be a mom with so much lovely, thoughtful detail that it's making people a little emotional.

The Australia Zoo wildlife conservationist married her longtime boyfriend Chandler Powell in March and five months later, she announced she was pregnant. And as she explained in an Instagram post on Tuesday, it was an incredibly special day for both her and Powell when they knew they would become parents. But in those first few moments, it was just her making the realization on her own and "time stood still," as she put it,

"Discovering that I was going to become a mother will forever be a moment where time stood still," she wrote on Instagram. "I took a test and ran into the kitchen where Chandler was making us tea."

Instead of shouting out her news immediately, Irwin wrote that she took a beat before telling her husband, a fellow wildlife conservationist, and watched him making tea in her "most loved hedgehog mug." "This news would change the course of our future in the best way," Irwin recalled thinking.

The daughter of famed Crocodile Hunter Steve Irwin, who died in 2006 after being stung by a stingray, eventually told Powell and even their puppy knew something special was happening. "I started crying tears of pure joy and told my sweetheart husband that my test was positive," she shared on Instagram. "We were beaming while our adorable puppy Piggy sat on our feet wondering what was going on. It reminded me of just how perceptive animals are."

Afterwards the couple sat down together to discuss their future and how they would tell their family and the people they love. And as Irwin concluded, "I can’t wait to find out what this amazing new soul loves in life, and experience the world all over again through their eyes."

Social media users were moved by Bindi Irwin's lovely post, with one noting it reminded her of when Bindi's own parents, Steve and Terri Irwin, discovered they were expecting her. "So beautifully and perfectly expressed! It reminded me of when your parents were expecting you!" they wrote. "Your pure joy is contagious! Wishing you all the joy your hearts can hold!"

Another social media user noted, "You are so your dad. Other than loving living things a living one is growing inside you. Your dad is watching over you and giving the thumbs up. Congratulations on your new venture of being the most important people in the world to that little one."

Bindi Irwin's baby is already so loved. And it all began with a quiet moment in the kitchen, waiting for the tea to brew. How lovely.