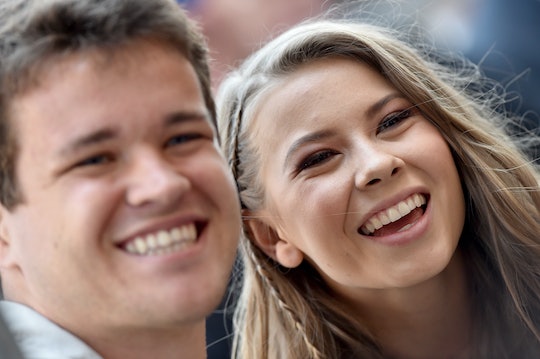 Crocodile Hunter fans watched her grow up, but there's a new man in town you'll want to get to know now that she's married and has a baby on the way. So go ahead and get ready to fall in love with Chandler Powell, Bindi Irwin's husband, who can't seem to stop smiling whenever he's photographed with his wife.

Irwin, daughter of the late famed Crocodile Hunter and wildlife conservationist Steve Irwin, married her longtime boyfriend in March 2020. The couple first met as teenagers in 2013 when Powell — who was a professional wakeboarder from Seffner, Florida at the time — was visiting the Australia Zoo Irwin's family has been running for years. Powell told People that he and Irwin "hit it off right away," while she told the magazine she was excited to find someone who shared so many of the qualities she admired in her own dad, who died in 2006. "He loves wildlife and conservation and he has this strength. Which is necessary when you’re jumping on crocs," she told People. The pair began to officially date in 2015 and Powell made the move to Australia to live at the zoo with his future wife in 2018, according to Country Living.

Now they're married and about to become parents. No wonder these two physically cannot seem to stop smiling, as evidenced by Powell's recent post.

Irwin first announced that she and Powell were expecting their first child together on Aug. 11. "We couldn’t wait to share the news as this beautiful little being has become the most important part of our lives," she captioned her Instagram post. At the time, Powell made his own feelings about the exciting news known when he commented on the post, "You're going to be the best mother."

In his own follow-up Instagram post from late August, Powell couldn't help enthusing about all of the wonderful new developments in his life these days. "I married my best friend, we recently found out our family is growing, and we’ve spent the past few weeks helping research crocodiles on the Steve Irwin Wildlife Reserve in Far North Queensland. Every day is incredible with my beautiful wife," he wrote on Instagram.

If you know of a sweeter couple than Bindi Irwin and Chandler Powell, out there saving wildlife and smiling all day long, go ahead and direct me to them. They're making 2020 somewhat bearable.