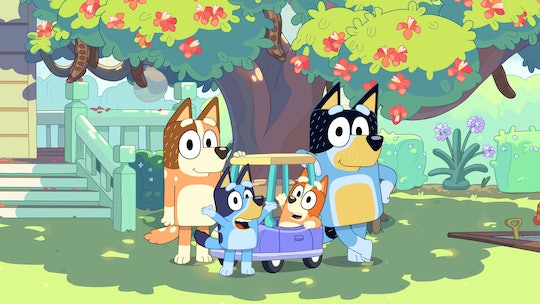 Between each episode’s life lessons and the witty dialogue, the popular Australian animated series Bluey is a hit for many reasons. But even the most avid fans of the show may not be aware of one sweet behind-the-scenes detail about Bluey that makes the preschool series even more lovable.

With a setting inspired by the nature and feel of Brisbane, Bluey follows a 6-year-old Blue Heeler puppy named Bluey as she plays with her younger sister Bingo, dad Bandit, and mom Chilli. Bluey’s creator Joe Brumm told Screen Queensland in 2017 that the show is a “celebration of the role of imaginative play in shaping healthy kids” in ways that bring the whole family together. And in a December 2019 interview with The New Daily, Brumm shared that the family aspect goes behind the scenes as well. "Bluey, Bingo and some of their friends are voiced by children of the production crew,” he told The New Daily. Their identities are kept secret for good reason, and the personal connection just makes the show that much sweeter.

One voice that is very much not a secret is that of Bluey's dad, Bandit. Fans of '90s indie rock may recognize the vocal talents of David McCormack, the front man of the Brisbane band Custard, according to News.com.au. In an interview with The Guardian, McCormack shared he loves the show for its relatable storylines and revealed that one of his favorite episodes is "The Dump."

"How good is going to the dump!” McCormack told The Guardian. "I relate to that totally, because I do love going to the Refuse Transfer Station, as it’s called now, with the kiddies. They gave me the script and I’m like, ‘yeah!’ I don’t have to try too hard to get in the vibe of it."

In the same 2019 interview with The New Daily, Brumm explained that while kids will hopefully learn from the show, he hopes everyone can have a good laugh. "I didn’t want to try and teach anyone anything. It’s about me showing my experience as a parent," he told The New Daily. "You can learn how beautiful play is if you want, but you don’t have to. Just laugh with your kid at a pony taking a dump. That’s a good outcome for me."

There's a reason that families love Bluey so much and the little details behind it certainly add to the appeal. Season 1 of Bluey is available to stream on Disney+ and Season 2 is currently airing on the Disney Channel.

Editor's Note: This article has been updated.

More Like This
Freeze! The Single From The New 'Bluey' Album Just Dropped
When Does 'Yellowstone' Season 5 Come To Peacock? Not Soon Enough
Pixar’s 'Turning Red' Is Nominated For An Oscar — Here’s How To Watch It Right Now
A Breakdown Of The Dutton Family Tree In The 'Yellowstone' Prequel '1923'
What Parents Are Talking About — Delivered Straight To Your Inbox