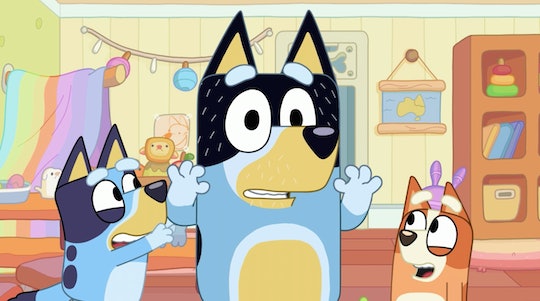 Don't Worry, You Can Definitely Find 'Bluey' On Disney+

Odds are, if you have young children, you are at least vaguely aware of the precocious Bluey and her family — a foursome of blue heeler pups with Australian accents. The show has been lauded as a surprisingly palatable kids' show and offers a welcome break from the likes of Mickey Mouse Clubhouse. And if you're wondering where to stream the fun show, the first season of Bluey is indeed on Disney+.

Although there is only one of season of Bluey currently on Disney+, Season 2 of the hit kids' television show began airing on the Disney Channel and Disney Junior in the United States on July 10. But don't worry, once it's finished its initial run on TV, Season 2 of Bluey will also be available to stream on Disney+, What's On Disney+ has confirmed.

If you're just tuning into the splendor that is Bluey, the animated series follows 6-year-old Bluey, her 4-year-old sister, and their parents as they navigate the everyday monotony with creativity, love, and a little bit of imagination. You and your littles will likely be hooked from the very first episode, "Markets," wherein Bluey proudly tells her dad, Bandit, that the tooth fairy gave her $5. Shocked at the amount, Dad spits his cereal out and looks to Bluey's mom Chilli, who tells him that's the going rate for a baby tooth these days. This leads the kids on an adventure to determine how best to spend the loot, and hilarity ensues. All of the episodes offer their own bit of fun for the family.

Along with the storylines, the family's dynamic is worth watching. While Mom works and serves as the voice of reason, Dad stays at home and parents with a mix of sarcasm and sympathy that is borderline contagious.

Subscribers to the streaming service currently have access to the show's first season, which includes over 50 episodes of the show — each coming in at around 8 minutes, making it easy to parcel up screen time. The show first aired on Disney+ in January, meaning many families have already torn through the first season; fortunately Season 2 is on its way soon.

You can opt for a solo Disney+ subscription at $6.99 a month or $69.99 annually, with a signup page on the Disney+ website. However, there is also an option to bundle the service with Hulu and ESPN+ for $12.99 a month, which saves you about $5 a month if you sign up for all three.

If Bluey isn't reason enough to get you into Disney+, the seemingly endless list of shows, movies, and documentaries is certainly enticing as well.

More Like This
Exclusive: 'Firebuds' Dives Into Hanukkah Traditions In Festive New Episode
20 Heartwarming Episodes To Help Prepare Your Child For A New Sibling
How To Watch Santa Claus Is Comin' To Town In 2022
How To Watch 'Frosty The Snowman' This Holiday Season