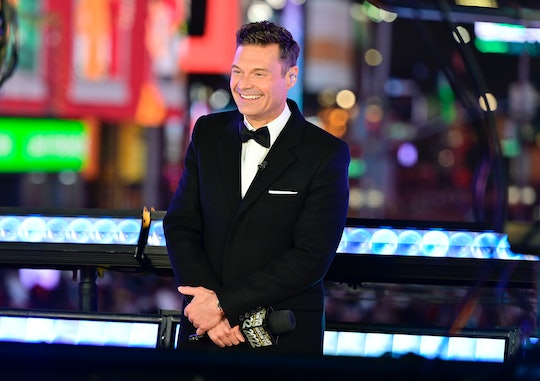 This year will be extra magical with a little Disney pixie dust!

How is 2023 just around the corner? Ready or not, the new year is nearly here and Ryan Seacrest is going to help us all ring it in... on TV, that is. Whether you’ll be in New York City to watch in person or on your sofa at home, there’s no better way to celebrate the holiday than Dick Clark’s New Year’s Rockin’ Eve With Ryan Seacrest. Here’s everything you need to know about watching Dick Clark’s New Year’s Rockin’ Eve from home.

Seacrest is returning as the host and executive producer for the 18th time, along with co-hosts Liza Koshy, and country music star Jessie James Decker; who will draw the winning Powerball numbers. Billy Porter will host the festivities in New Orleans while DJ D-Nice will co-host in L.A. Roselyn Sanchez will also be hosting from Puerto Rico. And if you thought last year’s festivities were a ball with the 50th anniversary, this year will be magical with Disneyland becoming this year’s inaugural host destination.

If you do not have ABC, you can also watch it live on the Hulu+ app. And if all else fails hashtag the special and watch the clips on social media. Trust us, there will be reposts out there!

Who is performing at Dick Clark's New Year's Rockin' Eve?

Performances will be taking place from coast to coast. Those hitting the stage include Ciara who will perform her singles; “Better Thangs” and “Jump” from Disneyland; indie pop band Fitz and The Tantrums and country music duo Maddie & Tae.

Reggae artist Shaggy and hip-hop’s Wiz Khalifa are also set to perform along with The Little Mermaid star Halle Bailey who will sing her rendition of Janet Jackson’s “Together Again.” South Korean band Tomorrow x Tomorrow will be bringing the K-pop, along with Bailey Zimmerman who will sing his single “Fall In Love” and fan-favorite “Rock And A Hard Place.”

Organizations that honor equality will be recognized.

Several organizations that have been at the forefront of social justice, mental health, and equality will be honored before the ball drops. Each one is supported by a Rockin’ Eve co-host. Those include the wellness non-profit, The Center for Black Women’s Wellness, supported by Ciara; the mental health non-profit Fund Recovery backed by Jesse James Decker; the Sato Project, an organization supported by Roselyn Sanchez which aids abused and abandoned dogs in Puerto Rico; Silence The Shame, Inc. supported by D-Nice; and the LGBTQ foundation Stonewall Foundation, supported by Billy Porter.

Each organization is considered a Culture Catalyst, an initiative introduced last year which spotlights non-profit organizations for their transformative work.

There will also be a special Rockin’ Eve at Disneyland

This year, the party will also touch down at the Happiest Place on Earth. Disneyland will be the inaugural host destination with host Ciara. The pre-taped celebration will kick off Disney’s 100 Years of Wonder Celebration.

Last year’s 50th anniversary garnered over 24 million viewers. The On Air With Ryan Seacrest took over as host after Clark’s death in 2012, who had started the special in 1972. “I idolized him from the start, and I was graced early on in my career with his generous advice and counsel,” Seacrest said at the time. “When I joined his show in 2006, it was a dream come true to work with him every New Year’s Eve for the last six years.”

More Like This
The Best Valentine’s Day TV Episodes For Kids
25 Sweet Movies Families Can Watch Together On Valentine’s Day
20 Impactful Documentaries To Stream During Black History Month & Beyond
Marcel The Shell Is Heading To The Oscars!
What Parents Are Talking About — Delivered Straight To Your Inbox

This article was originally published on Dec. 10, 2022