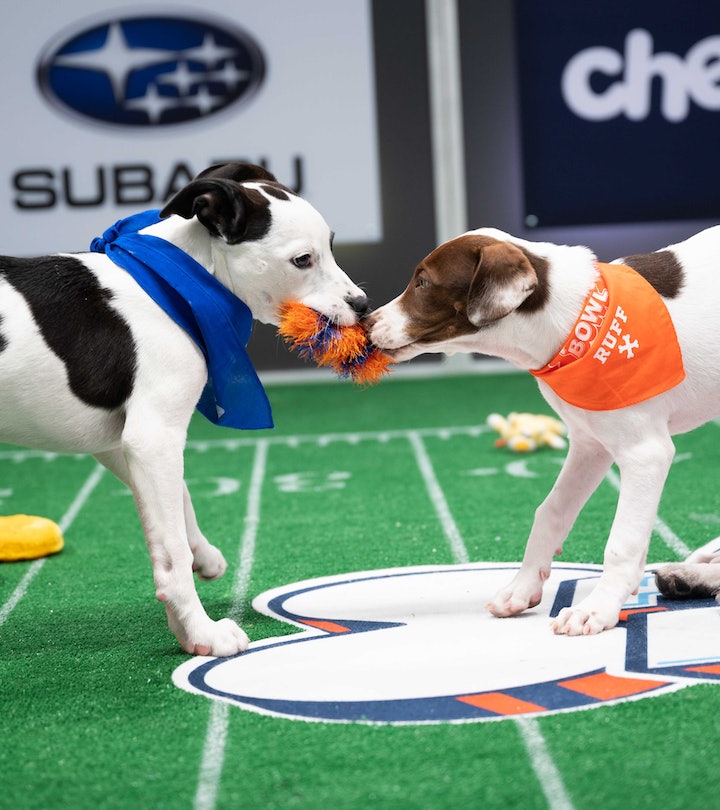 Are you Team Ruff or Team Fluff?

The cutest night in sports is nearly here. On Super Bowl Sunday, families across the country will be watching the 2021 Puppy Bowl. So while your Super Bowl festivities may be a little tamer this year, you can still certainly indulge in all the cuteness Team Ruff and Team Fluff have in store. And nachos and chicken wings and pizza and cheesy dips... it is Super Bowl Sunday.

Team Ruff and Team Fluff will face off at the 17th Puppy Bowl, also known as Puppy Bowl XVII on Sunday, Feb. 7, which of course is the same day as the Super Bowl. Although the stakes might not be as high as they are for the NFL players competing in Super Bowl LV, these athletic pups in the Puppy Bowl are still competing for the ultimate title. So before the big day, here is everything you need to know to watch the Puppy Bowl in 2021.

The three-hour long broadcast of this year's Puppy Bowl will be held on Sunday, Feb. 7 starting at 2 p.m. EST. This will give viewers plenty of time to switch over to the Super Bowl, which will air on CBS at 6:30 p.m. EST. A Puppy Bowl pre-game show will air before the competition at 1 p.m. EST to give insights on the matchups happening on the field.

You Can Watch It On TV Or Stream It

The Puppy Bowl will air on Animal Planet as well as Discovery+, a newly launched streaming service that's available on Amazon TV streaming devices, Apple devices, and Google devices. But you will need a Discovery+ subscription, which starts at $4.99 a month after a free seven day trial to watch the big show.

If you don't have a TV subscription, you can watch Team Fluff try to defend their victory from last year on the Animal Planet channel on live streaming services like fuboTV, Hulu Live, and YouTube TV.

It's The Same Competition You Know & Love

Like in years past, the 70 players in this year's Puppy Bowl come from 22 different shelters and rescues from nine different states. And every player is available to adopt.

The Kitty Half-Time Show will also return for a must see performance, along with "Rufferee" Dan Schachner, who has been making all of the tough calls on the Puppy Bowl field for the past decade, according to Discovery.

What's different? This year the pups will play in a brand new "stadium within a stadium." And starting now, viewers can vote online for their favorite pup player in the "Pupularity Playoffs" leading up to the showdown. The winner will be revealed during the Puppy Bowl broadcast. So place your bets now because Puppy Bowl 2021 is right around the corner.