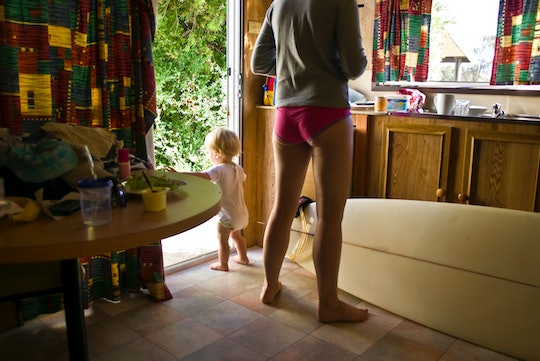 “I’m worried now that our daughter is getting older.”

The world has changed significantly for parents in the past few years, fashion-wise. We’ve all spent so much more time at home, whether shifting to remote work or dealing with sick kids home from school. Which we all know means we’ve been hanging out in sweats way more than before. And one dad on Reddit is not happy about it. He’s worried his wife’s casual look at home is going to be setting a bad example for their daughter, and boy do people have feelings about it.

The father in question took to Reddit’s parenting community to ask for advice. “My wife has always been very relaxed about what she wears around the house and I'm worried now that our daughter is getting older it may be setting a bad example?” he wrote. “Wife says I'm overthinking it and i honestly probably am. I can see her point, she wants to have a secure environment free from being embarrassed or ashamed and maybe other households are this way too? I can be guilty of being too old fashioned from time to time.”

He was especially concerned about his wife going topless in front of their daughter, and one mom had some advice for him on this subject. “How old is your daughter? I personally am frequently topless in front of my kids, but my kids are only 4 and 8 months old. The 8 month old was literally being fed from my boobs until just a few months ago. I think once either your wife or your daughter start to show discomfort with it, then she should start to cover up more. But for now I don’t really see the issue.”

Is it actually OK for parents to walk around without clothes on around their kids? According to one expert, yes. “Nudity between parents and children is fine as long as both are fully comfortable,” parent coach Dawn Huebner, Ph.D., author of the self-help book for kids What to Do When You Worry Too Much, told Healthline. “The goal with children is to foster delight and confidence in their bodies while gradually, over time, teaching norms related to privacy and consent,” she says.

Another person on Reddit agreed. “Yep overthinking it. If and when your daughter expresses discomfort about it is when those boundaries should be reassessed.”

A few Reddit users had different opinions, remembering their own parents and their at-home clothing choices like this person who wrote. “My father used to be very loose with his clothing etc, and it was awful growing up. We couldn’t say anything either as he used the excuse he worked all day and needed to be comfortable at home. It also became an issue when we wanted to bring friends around as we got older and didn’t feel safe doing it for fear of embarrassment and shame.”

Chilling out at home in a T-shirt and underwear doesn’t sound like the worst thing in the world. And if their daughter is bothered by it, she’ll probably say something. So perhaps it’s a bit of a non-issue.