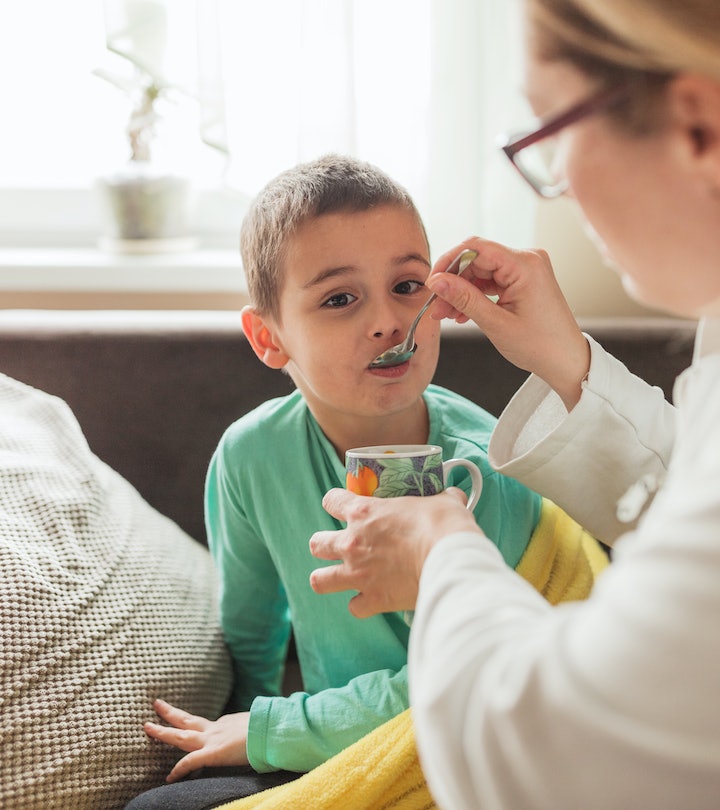 These 7 Situations Mean Your Kid Is Too Sick For School

Break out the Motrin and heat up some soup.

Last night your kid was fine: they did their homework, ate a good dinner, and played around before bed. But this morning, they don’t feel well. Maybe they’re running a fever, complaining of a tummy ache, or coughing nonstop. So, how sick is too sick for school? Knowing when to keep kids home from school or day care can help your little one feel better faster, and prevent their bug from spreading around the whole class.

There are some illness symptoms that mean your child should stay home from school, no questions asked, and a fever is usually at the top of that list.

“A temperature of 100.4 or greater, whether you take it orally, on the forehead, in the armpit, wherever, it’s considered a fever. If a child has a fever, they should be home for 24 hours without the fever coming back without the help of fever-reducing medicine,” says Dr. Stanley Spinner, chief medical officer and vice president of Texas Children's Pediatrics and Texas Children's Urgent Care.

“The presence of fever is felt to indicate infectivity, so not only is it making your child feel unwell, but it means they’re a risk to other children in close environments, like schools,” says Dr. Cynthia Cross, FAAP, assistant professor of pediatrics at University of Tennessee Health Science Center, and hospitalist at Le Bonheur Children’s Hospital. She notes that some schools may consider 101 degrees a fever for school-aged children, so it’s important to check your school’s sick policy.

They’re vomiting or having diarrhea repeatedly.

Deciding when to keep kids home from school for vomiting and diarrhea is a little more difficult. Spinner points out that children can have diarrhea after having a cold or other illness while their gut heals. As long as it’s under control and they’re not having to leave class for the bathroom all day, he recommends letting them go to class.

“Day cares may have rules about how often they’re willing to change diapers. Again, if your child seems to be well otherwise, asking them about that would be a reasonable approach to take,” says Spinner.

How long after a child throws up can they go to school? Well, that depends on the cause.

“Vomiting can be a gray area,” Spinner says. “Sometimes a child eats something that just doesn't agree with them and throws up once, and they can go back to school the next day. If they’re not having any other symptoms of illness, let them go to school. If they’re vomiting a second time, I would keep them home until they’re not vomiting for 24 hours.”

“Vomiting without diarrhea or fever can be a sign of something more serious, like a bowel obstruction,” says Cross. “If they're vomiting and not much else is going on, and it goes on for 12 hours or so, especially in a child under 5, that’s a reason to keep a kid home to monitor them.”

The guidelines about when to keep your kid home from school with covid have changed, like, a hundred times over the last few years. Currently, if someone tests positive for covid, the Centers for Disease Control and Prevention (CDC) recommend staying home for at least five days and isolating from others in the household.

They have a sore throat.

Most people have an irritated throat during a cold thanks to all that nasal drainage, but before sending your child to school with one, it’s worth taking them to the doctor.

“Viral pharyngitis or strep throat are very contagious, and strep can lead to complications if it’s not treated,” says Spinner. “If you really think they have a sore throat, probably better to keep them home a day or two and have them checked. If they’re having a lot of cold symptoms and drainage, the problem is really in the nose, but they probably ought to stay home until they feel better anyway.”

It may just be beneficial for your child to take a day to rest, even if they could go to school in their state. “If they’ve had a sore throat that kept them up all night, are they really going to do well at school? Rest is important for recovery as well, even if you don’t necessarily feel they’re contagious,” says Cross.

They have symptoms of pink eye.

Did your kid wake up with watery, red, or crusty eyes? You may need to take the day and get them to the doctor.

“If suddenly either eye or both eyes are red, you probably ought to keep them home until you understand what’s causing it. You don’t want to send them to school right away, because if they have an acute case, they could easily give it to everyone there,” Spinner says.

He adds that, after getting eye drops from your child’s pediatrician, it should be OK for your kid to go back to school. Just check your school’s sick policy first, as many have specific guidelines about returning after having pink eye.

“For the first 24 hours, they probably ought to be kept at home if they have true pink eye. If it’s an older child not really rubbing at their eyes or feeling bad, I don’t believe keeping them home several days is worth it. Often, you'll have to check your school sick policy for what their rules are.”

They have a severe headache.

Spinner says headaches or migraines that are intense enough to keep your child from concentrating are a good reason to stay home. “Medicate the headache, and when they’re feeling well enough for school, we would encourage them to go,” he says.

They have ear pain.

Ear pain alone doesn’t mean your child shouldn’t go to school or day care, Spinner explains, because ear infections aren’t contagious (though they definitely hurt and could make it hard to focus, Cross notes). But if it isn’t going away, you may need to keep them home and make a doctor’s appointment.

“Ear pain can be caused by more than ear infections. If your child is acting like their ear hurts and you medicate them and they settle, and aren’t otherwise sick, you can send them, but if it persists after a few days, you generally want them to be checked out to see what’s going on,” Spinner says.

When your kid can go to school sick

On the other hand, Spinner says you don’t necessarily need to keep your child home if they have a mild cold (again, as long as you’re confident it’s not covid).

“One of the most common scenarios is a cold — runny nose, congestion, coughing. Without a fever or diarrhea, most parents have sent their kids to school with colds, because they get them often, and it’s not practical to have them out of school every time,” Spinner says. “It comes down to judgment. If it’s severe at the outset, keep them home initially. They could have cold symptoms for two weeks, and you may not need to keep your child home that whole time.”

If you’re wondering, “Can my child go to school with a cough?” — the answer is yes.

“You can have a cold and be past the infectious stage, and cough for two or three weeks easily,” Spinner says. “If the cough is disruptive to others, they shouldn’t be there and should be checked out. If they’re otherwise fine, by all means, they should be at school.”

Both doctors note that if your child frequently complains of sickness or stomach pain, it may actually be extra important that you take them to school (and try to understand what’s really going on).

“Is your child being bullied at school? Is there something keeping them up at night? It’s really important to explore the context of your child’s symptoms,” says Cross.

You know your kid better than anyone, so if they seem to feel crummy and just need the day to recover (or they mysteriously feel sick the morning of their big test on long division), trust your gut. Cross also wants parents to call their pediatricians with any questions — that’s what they’re there for.

More Like This
Do Parents Really Need To Worry About Their Gas Stoves? Pediatricians Explain
14 Recipes For Sick Kids When Everyone's Tired Of Canned Soup & Crackers
Winter Travel Tips For Families
Tips to Beat Jet Lag, For You & Your Kids
What Parents Are Talking About — Delivered Straight To Your Inbox