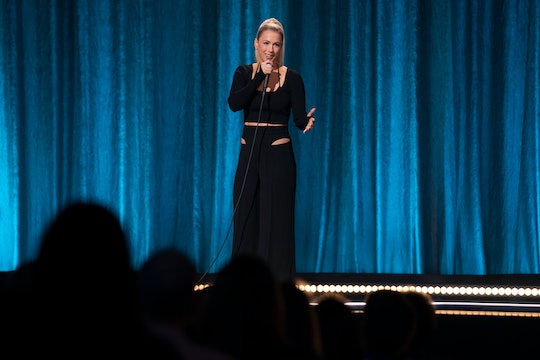 And her dog, too.

Iliza Shlesinger’s new Netflix comedy special Hot Forever is available to stream now, and as with all comedy specials, she draws from her own life. Which is great news for parents because Shlesinger is a new mom. Talk about a stage of life that is absolutely ripe with material. Add to that her openness about married life and you’ve got yourself some comic gold.

She has been married to Noah Galuten since 2018.

Shlesinger married chef and cookbook author Noah Galuten in 2018. When Galuten proposed to her, she told Brides in 2018 that she nearly ruined the romantic moment by needing to pee. “We went out to dinner, and I remember starting to unbutton my pants as I came in the door because I had to pee,” she said at the time. “I realized our living room was full of flowers and candles, and Noah stopped me before I left the room, saying there was something he wanted to do before I ran off to the bathroom. I started crying and turned away, yelling that it couldn’t happen with my fly down!”

Clearly they worked through it.

They host a cooking series together.

The couple co-host a cooking series called Don’t Panic Pantry every Monday on YouTube, all about “helping people cook the food they want to eat.” The series sees the couple having hilarious, and ever-relatable, arguments about things like the pronunciation of the word “croissant,”that makes it one of the more watchable YouTube cooking series.

They welcomed their first child, daughter Sierra, together in January 2022.

Shlesinger and Galuten welcomed their first child in January, a daughter named Sierra Mae. “We live in Hollywood and she is the first person I've been excited to meet," Shlesinger told People at the time her daughter was born. “Mother and baby are doing beautifully. Dad's back hurts, unrelated to pregnancy.”

They had to compromise on a name.

When it came time to name their baby girl, Shlesinger and Galuten had to find a compromise. The new mom told People that she wanted a “unique name evocative of nature” while her husband wanted something easy. So they split the difference. “My husband wanted an easy name — our compromise was a unique name with an uncomplicated spelling.”

It can be tough to be a mom of a human and a mom of a dog at the same time, but Shlesinger seems to have found a balance. Sort of. She talked about her fascination with her dog in her Netflix special Hot Forever and it seems her husband is the one who has to hear about it all the time. Even when he doesn’t really want to, and despite the fact that, as he points out, “We have a real baby.” Shlesinger countered, “But this one has four feet. You can kiss this one deep in the mouth and you will not go to jail.”

You can’t argue with that.

She understands the struggle of maternity fashion and letting go of your “ugly bra.”

In Hot Forever, Shlesinger discusses how her body changed during pregnancy with her daughter and the societal pressure women feel to not gain weight. But the stress of parting ways, even temporarily, with her dearly loved “ugly bra”? Ooof.

“I didn’t buy maternity clothes, I just wore leggings and t-shirts,” Shlesinger shared. “But you gotta get new underwear ... and you gotta get a new bra and I will tell you what, that was mentally very difficult. Because a woman’s relationship with her bra, particularly the ugly one, is sacred ... Every girl has an ugly bra, I believe it’s what unifies every one of us. We all got an ugly bra and the bigger your boobs are the uglier that bra is.”