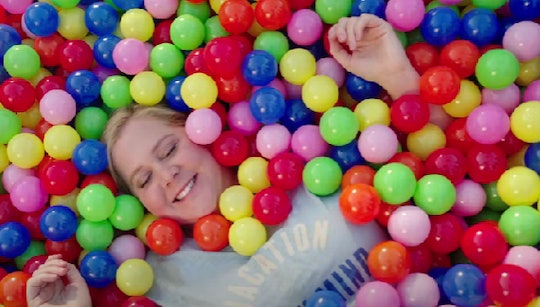 Amy Schumer has been busy in the past six years. She got married to husband Chris Fischer, became a first-time mom to 3-year-old son Gene, learned to cook on her own cooking show, hosted what was arguably one of the most controversial Oscars in living memory, got arrested for protesting. All of these big changes in her life will presumably (hopefully) become content for the fifth season of her amazing sketch comedy series, Inside Amy Schumer. After a six-year hiatus, it’s finally coming back. And this time around, it looks like we can all expect some brutal mom content.

Inside Amy Schumer returns for Season 5.

The last time fans watched new episodes of Inside Amy Schumer was back in 2016 on Comedy Central. This is where the comedian debuted hilarious and also scathing skits like “The Last F**kable Day,” featuring Julia Louis-Dreyfuss enjoying a picnic to celebrate her last day of being “f**kable” with Tina Fey and Patricia Arquette. Schumer told The Hollywood Reporter that she decided not to come back for a fifth season after Donald Trump became president in 2016 and she was “depressed and didn’t feel like she had anything helpful to say” at the time.

Now, it seems, she has enough to say for a fifth season. And we’re ready to hear it.

Prepare for a sketch comedy moms will appreciate.

On Oct.6, Schumer announced that her award-winning sketch series Inside Amy Schumer would be returning for a fifth season with, along with a teaser clip. “Whatever kind of experience you’re looking for,” Schumer says in character, “you can find it here.” The clip goes on to show Schumer in various characters: hugging a pretzel, laying joyfully in a ball pit, protesting with a megaphone, and perhaps my personal favorite, a mom character standing in a kitchen as her daughter shows her a picture and says, “I drew a picture of our family,” and Schumer tells her in a deadpan voice, “It sucks. Do it again.”

Deadline reports that this season of Inside Amy Schumer will feature sketches called “Colorado,” “Home Spanx,” “Gratitude,” “Fart Park,” “Second Amendment,” “The Last Noelle” and “Flatuda,” to name a few.

Inside Amy Schumer will call out important issues.

Schumer shared a clip from the new season of Inside Amy Schumer, a mock commercial for the state of Colorado that not-so-subtly tells visitors to the state that they can have “access to all the services you may need” while showing a women’s health care clinic. A reminder that abortion care is legal in the state, “not that you need a big dramatic reason to visit Colorado,” Schumer says, “maybe you just want to do with your own body what you want to do with your own body.”

Where can we watch Inside Amy Schumer?

This time around, Inside Amy Schumer is going to be streaming on Paramount+. And fortunately we don’t have long to wait as the fifth season drops on Oct. 20. Until then, the best thing you can do is to catch up on the first four seasons of Inside Amy Schumer on Paramount+ to reacquaint yourself with her particular brand of humor and topical commentary. It holds up.

More Like This
'Workin' Moms' Has An Official Release Date For Its Final Season
Here’s How To Watch Every 'Modern Family' Thanksgiving Episode
Quinta Brunson Credits Her Parents For Her Confidence, Now & As A Kid
'Wednesday' Creators Say They're "Talking Amongst Ourselves About Season 2