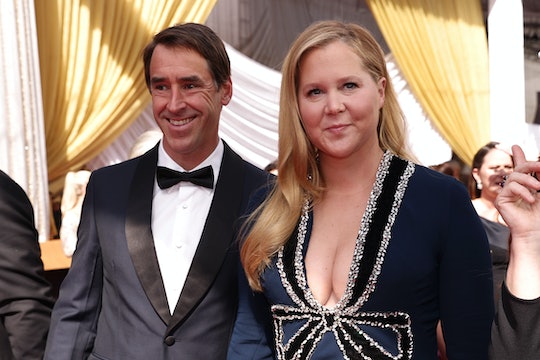 The comedian’s better half is there to comfort her as she heads out on tour.

As Amy Schumer prepares to head out on a multi-city comedy tour that will go on for more than 60 nights, she is feeling like any mom would feel. Anxious, worried, nervous. But fortunately for Schumer, she has a supportive, understanding partner in husband Chris Fischer. Not only is he staying home with their 3-year-old son Gene while she’s away, he was also doing his best to comfort her.

Schumer’s new self-described Whore Tour begins at the start of September, and she and husband Fischer had to make a decision about how they would deal with their 3-year-old son Gene during her time away. “With our life and her career and with Gene, it’s not really a conversation,” Fischer shared with The New Yorker in a recent profile of Schumer about his decision to stay at home in Brooklyn with their son while she’s on tour. “She tells us what’s going on, and Gene and I, we’re happy and willing and able, so far, to adapt.”

When Schumer explained that it “weighs on me” to leave Gene, going so far as to even try canceling engagements, Fischer comforted her by saying that he and Gene would come with her as often as possible. “I know. But traveling at this age ... routine is so good for them,” she said. “... When you hear them cry and reach for you, you just want to throw up.”

Schumer and Fischer, an award-winning chef from Martha’s Vineyard who married the comic and actress in 2018, have always given the impression of being true parenting partners. Even when Schumer was still pregnant with Gene and struggling mightily with hyeremesis gravidarum, extreme morning sickness. Fischer was seen caring for his wife in her HBO documentary Expecting Amy, and anyone who watched the couple’s Food Network series Amy Schumer Learns To Cook could see how they worked together to raise Gene.

But it’s the big moments like this one, Schumer leaving for weeks at a time for work and feeling grim about it, that really show how Fischer is there for her. Reminding her that he’s in her corner, taking care of Gene. So that she can work knowing her little boy is being loved and cared for and kept safe. That’s true partnership.