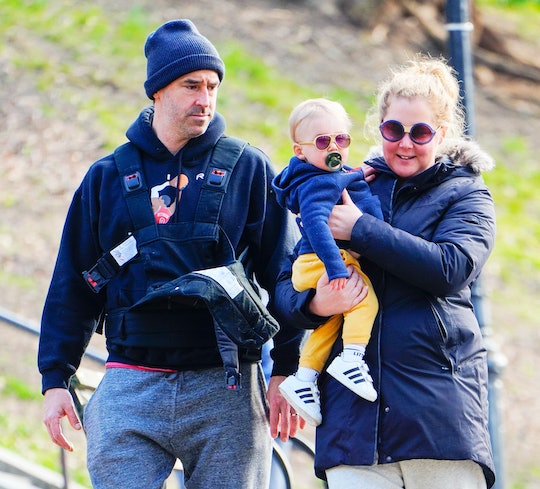 She's hilarious. So hilarious, in fact, that she’s been slated to host the 2022 Oscars. Amy Schumer is, of course, a comedian, but she is also often surprisingly profound, and perhaps most importantly, when it comes to her family. The Life & Beth star’s husband Chris Fischer, her son Gene, and everyone else she holds dear in her life often spotlight in the comedian’s work.

Schumer and Fischer recently celebrated four years of marriage. “Find someone who can stand you. 4 years today. Love you honey baby,” Schumer captioned a simple of the two of them from February. Since they tied the knot, Fischer has become a beloved star of Schumer’s Instagram and on our TVs. (Remember when the James Beard-winning chef taught us how to cook all the fennel we could ever desire in their hilarious cooking show, Amy Schumer Learns To Cook?) Here’s what else you need to know about him, as well as the rest of Schumer’s family.

Her husband Chris Fischer is an esteemed chef.

Fischer is a trained chef who met Schumer through his sister, the Trainwreck actress' personal assistant. She was introduced to him at Beetlebung, his family's farm in Martha's Vineyard, and sparks apparently flew when she asked him to cater her friend Rachel Feinstein's birthday party, according to The Knot.

Amy Schumer has been married to Chris Fischer for four years.

“It just felt like we were hosting this party together. He was cooking and I was getting things ready and we wanted everyone to have a really good time,” Schumer told Howard Stern in 2019. “And I was like, 'Uh oh. You know? I got that feeling where all the blood goes to all the places. And we were looking at each other a little bit longer. And it just changed.”

During her 2019 Netflix special Growing, Schumer revealed that Fischer was diagnosed as an adult as being on the autism spectrum after they first got together and she noticed some signs. And these signs ended up being some of the things she loves most about her husband. Like his inability to lie, for instance. In Growing, Schumer admitted, “He says whatever is on his mind. He keeps it so real. He doesn't care about social norms or what you expect him to say or do. You know, if I say to him, does this look like sh*t? He'll be like, yeah you have a lot of other clothes why don't you wear those?”

Then, of course, there was the time Schumer had to be hospitalized for hyperemisis gravidarum and Fischer had a rather hilarious reaction. “Without skipping a beat my husband said to my sister, ‘OK cool because I saw this place where you can paint pottery nearby,” she shared in her Netflix special. They both left, and Fischer eventually returned with a painting he had done of her, “without any qualifiers.” It was... less than flattering but 100% heartfelt and hilarious.

Her son Gene had an unfortunate middle name for a bit.

Gene Fischer was born in May 2019 and has already gone through a name change. Schumer and Fischer initially named their now 2-year-old son after their friend, comedian David Attell, which made him Gene Attell Fischer. Schumer admitted in April 2020 that they eventually changed his name when they realized it sounded like “genital fissure.” Now, Gene’s middle name is David, in honor of the same comedian.

In 2022, Schumer shared that while she and Fischer wanted to expand their family, Gene would be her only child after a failed IVF attempt. “We're gonna have just one child and we're just enjoying our little family and I'm just focusing on that,” she told Chelsea Handler on her podcast earlier this year.

The Trainwreck star suffered a difficult pregnancy with Gene. She was hospitalized with hyperemesis gravidarum, which is basically extreme morning sickness that saw her severely dehydrated. She remained ill far into her second trimester, something she wrote about on Instagram at the time, “Baby’s fine but everyone who says the 2nd trimester is better is not telling the full story. I’ve been even more ill this trimester.” Schumer ultimately had her uterus removed due to complications with endometriosis, and now she, Gene, and Fischer are a happy little family of three.

Gene is now a toddler and keeping his working mom busy in a totally different way. Like in March when she shared a photo of him in a diaper climbing all over her head while she tried to get some work done. “Easy to work with your toddler in the room,” Schumer captioned the post.

She’s worked with her sister Kim Caramele a bunch.

Schumer is especially close to her sister, fellow comedy writer Kim Caramele. The sisters have worked together several times, including Trainwreck and Comedy Central's Inside Amy Schumer, and Caramele was a bridesmaid at Schumer's 2018 wedding. Kim is Schumer’s younger sister, and the two have remained incredibly close throughout their lives.

In 2016, Schumer opened up to The Daily Beast about their close relationship, explaining, “It really weirds people out. We’ve had tough lives. So we really needed each other.”

Her brother Jason Stein is a musician.

Amy Schumer's brother is a musician.

Schumer's older brother Jason Stein is a jazz musician who has also worked with his sister in the past. Stein's jazz trio opened for Schumer several times when she was on tour doing stand-up in 2016, and she also dedicated two of her comedy specials to his daughter, Ida.

As she told Vogue in 2016, she feels grateful to have such amazing siblings. “Luckily they’re talented. Because it could have been horrible,” she told the magazine. “But to be able to take your brother and sister with you? It’s the best. There’s no class distinction between the three of us. When I started making a bunch of money, basically they did too.”

Gordon Schumer was in 'Expecting Amy.'

The I Feel Pretty actress is also close to her dad Gordon, who is second cousin to Sen. Chuck Schumer. Gordon Schumer was diagnosed with multiple sclerosis when his daughter was 12 years old, a tragedy she has said contributed to her honing her comedy skills as a coping mechanism. Gordon Schumer is often featured on his daughter's social media over the years and was also a part of the 2020 HBO documentary Expecting Amy.

Her relationship with her mom Sandra Schumer has grown since she became a mother herself.

Schumer's mom Sandra divorced her dad when she was young, and the two reportedly struggled to find a healthy balance in their relationship, as Schumer wrote in her 2016 memoir The Girl With The Lower Back Tattoo. Schumer has worked on negotiating a good balance with her mom. "We are kind to one another but I keep my boundaries clear. I have never given up on her. I can’t, and I never will,” she wrote in The Girl With the Lower Back Tattoo.

Now that she's a mom herself, things seem to have gotten easier. She told Entertainment Tonight in 2019 that welcoming son Gene into the world changed her, “I'm just nicer to my mom.”

Schumer’s new Hulu series Life & Beth all about complicated family relationships and finding love with someone who is considered neurodivergent is partially based on her own life, she told TIME. But don’t worry, she made sure they were comfortable with what was being written. “I’m really happy to talk about anything that is about me personally,” she told TIME. “But any parts of the show that are based on anyone, I did run by them.”

More Like This
Sarah Levy Revealed She's Pregnant & Got A Very Schitt's Creek Response From Brother Dan
Michelle Williams Is Going To Be A Mom Of 3!
Chris Pratt & Katherine Schwarzenegger Welcomed A Baby Girl With The Prettiest Name
Kourtney Kardashian’s Kids Begged Her & Travis To Stop French Kissing In Front Of Them