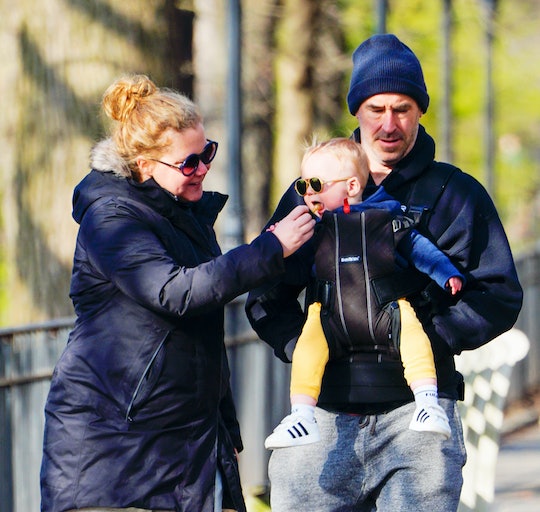 “We're gonna have just one child and we're just enjoying our little family and I'm just focusing on that.”

Amy Schumer is done having kids. She and husband Chris Fischer are parents to sone Gene, who will turn 3 this May, and the Life & Beth actress told Chelsea Handler on a recent episode of her podcast Dear Chelsea that he will be their only one. Schumer struggled with failed IVF treatment and last fall had her appendix and uterus removed to treat her “debilitating” endometriosis.

The past two years have been an emotional roller coaster for Schumer, as she started 2020 going through IVF treatment. “I did IVF, we made embryos and I went through the IVF process, which is so hard. People do it so many times. I did it one time and I was like, I'm gonna die. This is awful," Schumer told Handler. "I got like 31 eggs and I was like, I'm Fertile Myrtle. I felt very hot.”

Sadly, Schumer said there was a “drop off” that left her with one embryo after fertilization, and it didn’t work. “And now I don't have a uterus.”

Last September, Schumer shared a video with fans explaining why she had her uterus removed. “From the time I got my first period, I was knocked over vomiting from the pain,” she said. “Your periods shouldn’t be painful. And not everyone’s are.” Since her uterus was removed, Schumer reported in January that she’s feeling better.

Amy Schumer is happy as a mom of one.

And she’s also feeling better about being a mom of one. “We're gonna have just one child and we're just enjoying our little family and I'm just focusing on that,” she told Handler. “I'm excited about it but I was sad. And it's not really something you get sympathy for because it's like, you already have one b*tch, shut up. But you know, that's a real struggle people go through... We tried, but yeah we're just gonna have the one perfect little adorable angel."

It can be difficult to readjust your vision for the future, and Schumer should be praised for being so publicly vulnerable about it. Besides, as she wrote in a recent post on Instagram, her love for Gene is more than enough. “Being his mom is heaven on earth and also means a constant feeling of guilt and vulnerability I will never get used to,” she wrote. “Your heart feels like it’s outside your body and you’re too old to drink the feelings away like you used to. When you were in love and scared.”

As Schumer has touched on, parenting is beautiful and terrifying and emotional, no matter how many kids you have.