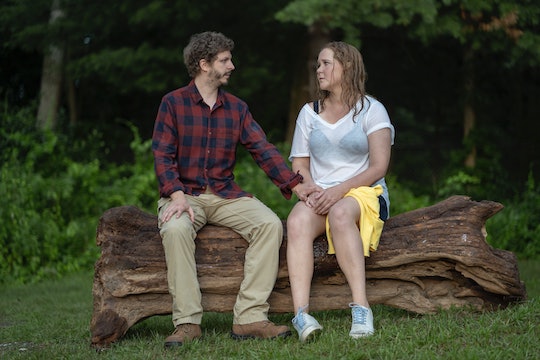 For starters, the comedian’s husband inspired her love interest in the Hulu series.

Amy Schumer is busy. The comedian, actress, writer, and mother of one is going to be hosting to the 94th Annual Academy Awards alongside fellow powerhouses Wanda Sykes and Regina Hall and currently has a new dramedy series, Life & Beth, on Hulu. And many viewers and Schumer’s fans have noticed that a lot of the details in the show seem... familiar. So is Life & Beth based on a true story? There are definitely elements of the comedian’s real life that play out in the show.

Note: Spoilers for Life & Beth are ahead.

Beth works in Manhattan as a sales rep for a wine distributor. The company, and the wines it represents, are admittedly mediocre. She’s been dating company superstar Matt for six years, despite their apparent lack of connection or spark. She has a loving relationship with her sister Annie, but mainly calls her to complain about their passive-aggressive mom, Jane, who has a penchant for criticizing Beth and dating married men.

In Episode 1, when Jane dies in a traffic accident, a tearless Beth returns to her family home in Long Island for the funeral. The loss prompts Matt to (finally) propose and Beth to leave him, and she finds herself drawn back to her old stomping grounds. It’s not just to see her high school friends (the only real friends she has); she even goes out of her way to find Long Island wineries to represent. At one such vineyard, she meets John (Michael Cera), whose awkward but unabashed forthrightness is a marked change of pace from the complicated, layered relationships she’s used to at work, with Matt, and her mother. The confluence of all these events prompts Beth to make big changes in her own life as well as confront her past.

The story is told both in present day and through a series of flashbacks to Beth’s difficult early teen years, when her family is forced to downsize from a posh Long Island mansion to a far more modest, early suburban cookie-cutter home and her relationship with her childhood bestie starts to fall apart.

The show features lots of parallels to Schumer’s family and friends.

Schumer told USA Today that she wrote the show after visiting Long Island and going through childhood journals while she was pregnant with her son, Gene, who will be 3 in May. She enjoyed “losing” herself in the writing process, and describes the series as about 50% autobiographical. “[I thought] I'd really like to examine that time in my life, the teenage years when these big moments happen for you that can traumatize you or change you, and how that affects you as long as you let it,” she shared with the outlet.

Like Beth, Schumer is a Long Island girl who keeps in close touch with her high school crew. Not only does she regularly call them out on social media but they go on vacation together every year and she even insisted they collectively be her “plus one” to the Hunger Games premiere. Schumer also has complicated relationships with both her mother and her father, and is very close to her sister, Kim, who worked with Schumer on Inside Amy Schumer, Trainwreck and Snatched. And, as she’s previously shared on her podcast 3 Girls, 1 Keith, her IRL father, like Beth’s father in the show, also fell on hard times in Schumer’s childhood, something that is explored in both Trainwreck and Life & Beth.

Schumer’s relationship with her mom is something she wanted to explore in the series.

“My mom was really destructive and did really harmful stuff, and also I felt so special and loved growing up,” Schumer told The Hollywood Reporter. “She’s been really f*cking cool about all of it. She’s like, ‘I’m 73, I own my mistakes,’ and that’s the thing: My mom is insanely flawed and I also love her an insane amount.”

Schumer also drew inspiration from the early days of her relationship with husband Chris Fischer.

Beth’s relationship with John intentionally mirrors Schumer’s relationship with her husband, chef and James Beard Award winner Chris Fischer. Like John, Fischer worked on a farm, and is forthright and plainspoken, something Schumer attributes to his autism diagnosis as an adult. While there’s no explicit mention of John being autistic in the series, Schumer told USA Today that the character is “most likely on the spectrum.”

Schumer has addressed particulars of the effect autism has on their relationship in her comedy. (She’s joked that the constant honesty isn’t so fun when she asks when he thinks of an outfit, but is great when he tells her she’s beautiful.) In her 2019 Netflix special Growing, the usually sarcastic Schumer sincerely gushed about how her is a “dream man” precisely because he is on the spectrum: “All of the characteristics that make it clear that he’s on the spectrum are all of the reasons I fell madly in love with him. He says whatever is on his mind. He keeps it so real. He doesn’t care about social norms or what you expect him to say.”

Fischer told The Hollywood Reporter that many of the moments shared by John and Beth mirror moments in his relationship with Schumer, and appreciates that the show serves as a kind of time capsule for that time early in their relationship.

Life & Beth is not strictly autobiographical.

Despite the close parallels in some instances, Life & Beth is a work of fiction, and Schumer admitted to “taking liberties” with a lot of the characters, so it would be probably be more accurate to say the show is inspired by true events than based on a true story. Still, the emotional heart, especially for Schumer’s character/avatar is true. “I wanted to really give [that period] the time and attention that I feel like I never did,” she tells USA Today, “to just be more gentle with myself in general and feel a little less guilty or ashamed, because I did have a rough time.”

More Like This
Kourtney Kardashian's Fertility Doctor Told Her To Drink Travis Barker's Sperm
Kourtney Kardashian’s Kids Begged Her & Travis To Stop French Kissing In Front Of Them
Quinta Brunson Is Giving Back To The School That Helped Inspire 'Abbott Elementary'
Take An Exclusive Look At A Brand New, Four-Part Peppa Pig Special