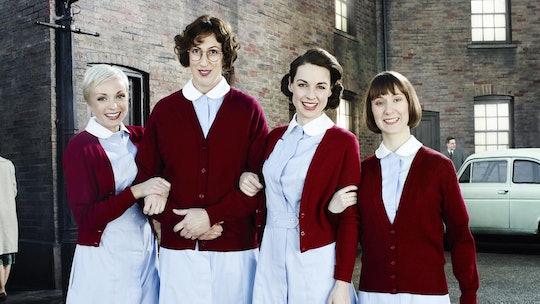 Call The Midwife Has A Fascinating True Story Behind It

Jenny Lee was based on the author that inspired the series.

Call The Midwife has been on the air for twelve seasons now, telling the stories of midwives and mothers giving birth in the poverty-stricken post-war Britain. The series has managed to cover a breadth of issues that continue to concern prenatal care to this day while also being deeply personal and specific. Which begs the question: Is Call The Midwife actually based on a true story? Because if Nonnatus House is real, I suggest a tour as soon as possible.

Call The Midwife was inspired by a true story.

Jennifer Worth wrote a trilogy of memoirs about her time as a nurse in East End London in the 1950s. Her first book, Call The Midwife: A Memoir of Birth, Joy, and Hard Times, was originally published in 2002 and became a bestseller, as did her two subsequent books, Shadows of the Workhouse and Farewell to the East End.

Worth’s memoirs inspired the series, and the character of Jenny Lee, played by Jessica Raine in the first three seasons and voiced by Vanessa Redgrave as the narrator through the rest, was based on the author herself. Worth received midwifery training when she was a nurse in the early ‘50s and worked with the Sisters of St. John the Divine just as Lee worked alongside the nuns of Nonnatus House.

Some of the characters are based on real people.

While much of Call The Midwife is fictional, some of the characters are based on people Worth knew in real life. Like the ever-patient Sister Julienne, played by Jenny Agutter, who remained close to Worth for many years after she left nursing to pursue a career in music in the ‘70s. “I have lovely memories of Sister Julienne,” Worth's daughter Suzannah Hart told RadioTimes in 2017. “Sister Julienne would write letters to me and [her sister] Juliette, with little stories and beautiful illustrations down the side in felt pen or watercolour. She’d come and visit us too, and towards the end of her life, by which time the community had moved to Birmingham, my mother would visit her every week.” The character of Cynthia, who became a nun on the show but in reality married a vicar, even became godmother to Suzannah Hart.

Nonnatus House is not real.

The patron saint of midwives and pregnant women is St. Raymond of Nonnatus, which makes beautiful sense for the series, but Nonnatus House is not actually real, according to The Sun. It was a set built especially for the series in Surrey. So no grand tour then.

The series sheds a light on East End London.

Before she died of cancer in 2011, sadly before Call The Midwife made it onscreen, Worth spoke to The Guardian about why she wrote her memoir. “So many of those great characters have stayed with me,” she said at the time. “Most people in London at that time didn't know the East End — they pushed it aside. There was no law, no lighting, bedbugs and fleas. It was a hidden place, not written about at all.”

Now the people of mid-century East End London feel as near and dear to audiences as any real person might. All thanks to Jennifer Worth.

How to watch Call The Midwife.

You can watch Call The Midwife on PBS Passport, as well as on Amazon Prime Video if you have added Britbox to your subscription, or catch the first 10 seasons on Netflix.

More Like This
Sea Monsters, Pandas & Everything Else Coming To Netflix In July 2022 For Families
'Caillou' Is Officially Getting A CGI Reboot Whether People Like It Or Not
The Summer I Turned Pretty Is A Beautiful Coming-Of-Age Story For Teens & Parents
Exclusive: 'Bluey' Celebrates Father's Day With A Look At Bandit's Best Moments