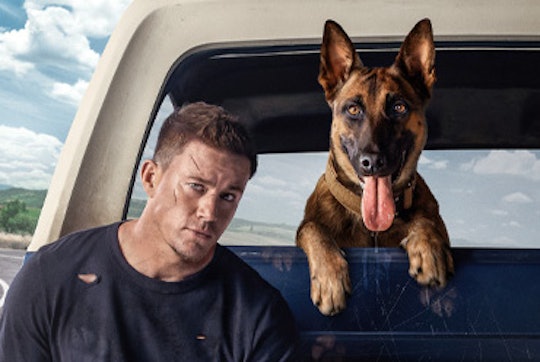 Some scenes and subjects may be too intense for little ones.

Seeing a movie with a dog on the cover also called Dog sparks a sort of Pavlovian response in humans, so you can imagine how we’d respond to seeing Channing Tatum beside said dog. We want to see it, of course we do, especially since a dog movie usually tends to mean a family film (Cujo notwithstanding). But is this new Dog flick actually the kind of movie kids should see? Here’s what families need to know.

In Dog, Tatum stars as Army Ranger Briggs, an ex-soldier who has been asked to drive his late army buddy’s difficult dog Lulu, a Belgian Malinois, down the Pacific Coast to attend his funeral. Lulu and Briggs get off to a rough start, with her attacking him several times and trying to run away as they both come to terms with the fact that they are struggling with PTSD.

Tatum, who is co-director and star of Dog, actually rescued a mixed-breed of his own named Lulu in 2008 and yes, they even took a long road trip together before she died of cancer in December 2018. “Lulu was my little shadow. She was everything. She was my best friend… She got cancer and she gave up a good fight,” the actor told People. “Towards the end, I took her on a little road trip to Big Sur and we camped and watched the sun come up. It was everything that you probably imagined it to be.”

While the sight of Tatum and Lulu finding their way to each other in the movie trailer is awfully sweet, the reality is that this movie is not meant for young kids. First, there’s the language in Dog that gets pretty strong in the movie, as Common Sense Media advises, but more than that there are the mature scenes. Discussions of death by suicide, war, and even traumatic brain injuries are not meant for young kids to watch.

Channing Tatum makes friends with a dog in ‘Dog.’

While the movie has been categorized as a comedy/family film, Dog earned a PG-13 rating for language, thematic elements, drug content, and some suggestive material, and that feels appropriate. The movie isn’t really for kids under the age of 13 years old.

Dog might not be the best for kids, but it’s certainly a hit with adults. Rotten Tomatoes certified it “fresh” with a 75% rating, while several people have tweeted their own positive reviews like this social media user who wrote that the movie was “what I wanted it to be. An adorable and hilarious road trip movie. Lulu the Dog steals the show and Channing Tatum has great chemistry with it. It’s also got heart but also cliched. If you are a dog owner this is impossible to dislike.”

When can you watch it?

If you feel like getting out for a night and immersing yourself in a movie full of compassion and warmth, Dog was released in theaters across the country on Feb. 18. A streaming release date and location is still to be announced from MGM Studios.

After a four year hiatus from making movies, it’s good to see Channing Tatum back. Especially with a dog by his side. Just not for little kids.