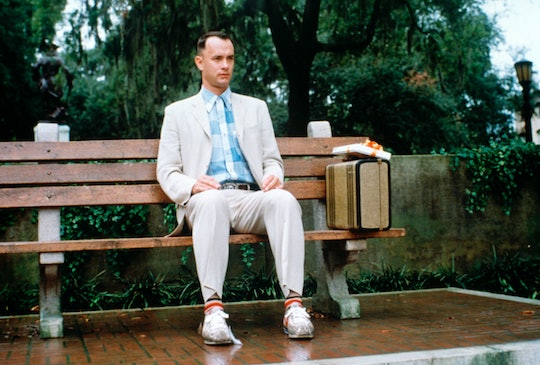 You’ll have to explain quite a bit.

The year was 1994 and everyone was talking about Forrest Gump. The movie became such a cultural touchpoint that no one needed to explain their references. If you said “life is like a box of chocolates,” the person you were talking to could finish, “you never know what you’re gonna get.” But after all these years, maybe it’s time to deconstruct the saga that is Forrest Gump to see if it’s not just appropriate to watch with your kids... but is it actually worth it? Here’s what parents need to know.

Forrest Gump follows a boy, his mom, and his Jenny.

Robert Zemekis’ 1994 film Forrest Gump was actually based on a novel by the same name by Winston Groom. The classic movie takes place mostly in Greenbow, Alabama, where young Forrest Gump (played by Tom Hanks) is growing up in his mom’s boarding house as something of an unusual young boy in the ‘50s. At the outset, it’s revealed that Forrest has a lower than average IQ, and he struggles to connect with many people. He struggles with regular social cues, subtexts in conversations, and keeps very much to himself. Except when Forrest loves something, he really loves it. Like his mom, played by Sally Field, swinging in trees, running, and a little girl named Jenny who becomes his best friend.

Throughout the movie, Forrest manages to play witness to many major world events over the next few decades, whether he’s meeting Elvis Presley at his mom’s boarding house, giving John Lennon the idea to write “Imagine,” or meeting a bunch of presidents at the White House. But everything comes back to Greenbow. And Jenny, played by Robin Wright.

Forrest Gump is a palatable and sometimes problematic history lesson.

Forrest sort of blunders his way through major changes in U.S. history like the Vietnam War and the Civil Rights Movement, proving to be almost a passive witness to the shifting times through the ‘60s, ‘70s, and beyond. It’s actually quite an entertaining way to watch history unfold, particularly through the somewhat innocent eyes of Forrest himself. But Forrest’s innocent outlook could also be perceived as over-simplification, especially when it comes to school segregation and racism.

Forrest Gump has been criticized for valid reasons since it was released.

In the decades since Forrest Gump was first released, critics have called out some serious issues with representation in the movie that need to be addressed, especially when watching with kids. There are several times when Black characters are portrayed with harmful stereotypes, for instance, and rewatching the sex scene between Jenny and Forrest is... a lot. Much of the movie hasn’t aged well, so it’s a good idea to stay alert.

Jenny’s storyline is also a tough one for kids.

While Forrest manages to go off and become a millionaire with Bubba Gump shrimp, Jenny’s life takes a heartbreaking path. She is the victim of childhood sexual abuse at the hands of her father, something that is alluded to heavily enough that children will probably have questions for their parents. Jenny also struggles with substance abuse and further physical abuse as an adult, which will likely spark further discussions with kids.

Forrest Gump is probably best for preteens and up.

Despite the strong language, problematic moments, and many mature themes, Forrest Gump is also a sweet, emotional, and funny movie for kids above the age of 13 years old. The movie encourages viewers to be more empathetic, to stick up for the underdog and try to see other people’s differences as strengths rather than weaknesses. Common Sense Media notes that parents might want to preview the movie to see if there’s anything they want their kids to avoid, and this seems like an excellent idea.

Forrest Gump is rated PG-13 for drug content, some sensuality, and war violence. Parents might want to skip over a few sex scenes, especially when Lieutenant Dan and Forrest seemingly hire sex workers.

Where to watch Forrest Gump?

Starting on May 1, you can stream Forrest Gump on Netflix and see if it holds up better or worse than you remember.

More Like This
5 Kid-Friendly Movies To Celebrate The Last Day Of School
'Top Gun: Maverick' Is More Tween-Friendly Than The Original
20 Memorial Day Movies To Watch As A Family This Year
Kate Middleton Explains Why Her Kids Couldn't Attend The Top Gun: Maverick Premiere