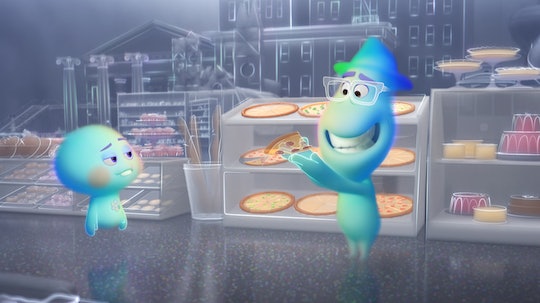 After a series of setbacks, Pixar's new movie Soul will premiere on Disney+ for families everywhere to safely watch at home this December. Yup, it's official — Disney and Pixar announced that all Disney+ subscribers will be able to stream the animation studio's heartwarming new flick this Christmas.

Soul, an animated music-centric film featuring Pixar's first Black lead character, will skip movie theaters and head straight to Disney+ on Friday, Dec. 25. But unlike the new Mulan, which was released on Disney+ in September with an extra $30 price tag, Soul will be included with the Disney+ subscription.

As Disney and Pixar tend to do with their movies, the plot of Soul will surely make you laugh and a bit emotional. The movie focuses on middle school band teacher and jazz musician Joe Gardner (voiced by Jamie Foxx), who is on the verge of getting his big break. But when he falls into an open manhole on the street, Joe is taken to The Great Before — "a fantastical place where new souls get their personality, quirks, and interests before they go to Earth," according to Disney. Joe ultimately teams up with a "soul" (those cute little orbs you see in the trailer) named 22 (voiced by the hilarious Tina Fey) so they can return him back to his body and discover the answers to some of life's most important questions, like "Is all of this living really worth dying for?"

Beyond its compelling storyline and all-star cast, the movie will also feature plenty of jazz music, including some original songs.

Pete Docter, one of Soul's directors and Pixar's current Chief Creative Officer, told SyFy that this movie has been a long time coming. "We're always looking to reflect as much of the world out there as we can, and we're happy it's finally happened, that we are representing a part of the population that just hasn't had as much of a voice in our films up to now," he told the outlet.

The movie, which is rated PG for thematic elements and language, had originally been slated to be released in theaters in June, according to Variety. But due to the current coronavirus pandemic, the film was postponed. "We are thrilled to share Pixar's moving and spectacular Soul with audiences direct to Disney+ in December," Bob Chapek, chief executive officer of the Walt Disney Company told Variety in a statement. "A new original Pixar film is always a special occasion, and this truly heartwarming and humorous story about human connection and finding one's place in the world will be a treat for families to enjoy this holiday season."

Don't have Disney+? Click here to learn more about a subscription.

More Like This
Marcel The Shell Is Heading To The Oscars!
Pixar’s 'Turning Red' Is Nominated For An Oscar — Here’s How To Watch It Right Now
Watch An Exclusive Sneak Peek At 'The Amazing Maurice'
20 Incredible Movies To Watch With Your Family During Black History Month & Beyond
What Parents Are Talking About — Delivered Straight To Your Inbox