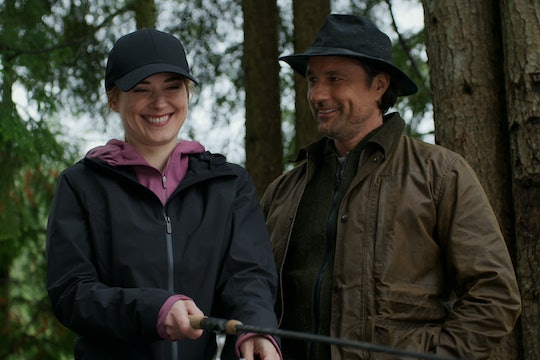 But is it a real place?

One of the main characters of the smash Netflix series Virgin River is the town itself. Fans can argue over which relationship is their favorite, which storyline keeps them hooked, which boot/jean/sweater combo of Mel’s is the absolute most adorable. But one thing everyone has in common is a love of Virgin River, the town. From the forest to the river to Mel’s cabin to Jack’s Bar, we all want Virgin River to be a real place. But is it?

Sadly, Virgin River Is Not A Real Town In NoCal

Virgin River is based on the series of books written by Robyn Carr and is meant to take place in a small town in northern California. But, alas, it is all fiction. Virgin River does not exist in northern California and was entirely invented by Carr, who told Entertainment Weekly in 2018, “People always write and say, Where is it? I want to go there,’ and I have to remind them that it only exists in our hearts and minds.”

Now don’t be too downhearted; with a little planning, fans can actually visit some versions of Virgin River. They’ll just need to make sure their passports are up to date.

Virgin River Was Filmed In Canada

‘Virgin River’ is filmed in Canada.

Every season of Virgin River was filmed on location around Vancouver and other small parts of British Columbia, Canada. The show was filmed in smaller coastal towns like Burnaby, Squamish, and Port Coquitlam, but if you are really hoping to put on your hiking boots and sweater and live your best Mel life, you might want to visit Snug Cove, a small community of about 3,700 people on Bowen Island.

The small town of Snug Cove is considered the best representation of Virgin River by Vancouver’s tourist website. “Snug Cove anchors the show as the fictional town of Virgin River, with establishing shots including the local library, main streets and Artisan Lane,” the site explains. Now if only they had a cute little log cabin with a fireplace ready for a single gal to go heal her emotional wounds and find love, that would be perfect.

What About Jack’s Bar?

If part of your Virgin River-themed holiday getaway is to meet a handsome bartender with a troubled past, you’re going to have to do some driving. Because Jack’s Bar is filmed at the Watershed Grill about 40 minutes outside of Vancouver. The Watershed Grill, much like Jack himself, looks to be worth the extra driving. Even if it’s just for the view from the patio alone. What a treat.