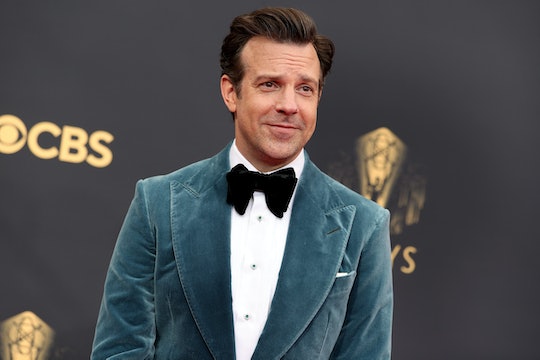 He didn’t forget about Daisy and Otis!

Winning the Emmy for Outstanding Lead Actor in a Comedy Series for his role on Ted Lasso was clearly an emotional moment for dad of two Jason Sudeikis. While accepting his award, the actor took the time to give his two kids a sweet little shout-out in his speech and was even a little teary-eyed through it all.

Finally, the proud dad got emotional when he thanked two of the most important people in his life. “I want to thank my children Otis and Daisy.”

Jason Sudeikis got emotional when he won his first Emmy.

Sudeikis shares 7-year-old son Otis and 4-year-old daughter Daisy with his ex, Olivia Wilde, and this past year has been a serious time of transition for the family. He and Wilde separated after nine years together, and the normally private actor opened up about struggling to come to terms with his new reality earlier this year, “I’ll have a better understanding of why in a year,” he told GQ in an interview. “And an even better one in two, and even a greater one in five, and it’ll go from being, you know, a book of my life to becoming a chapter to a paragraph to a line to a word to a doodle.”

Despite their separation, Sudeikis thanked Wilde in his Critics’ Choice Award acceptance in March for helping him come up with the concept for Ted Lasso. “I want to thank my kids, Otis and Daisy, and I want to thank their mom, Olivia, who had the initial idea for this as a TV show,” he said at the time. “She was like, 'You guys like doing that so much, you should do it as a movie or a TV show,' and she was right!”

An emotional night all around for the proud dad. Here’s hoping his kids were watching.