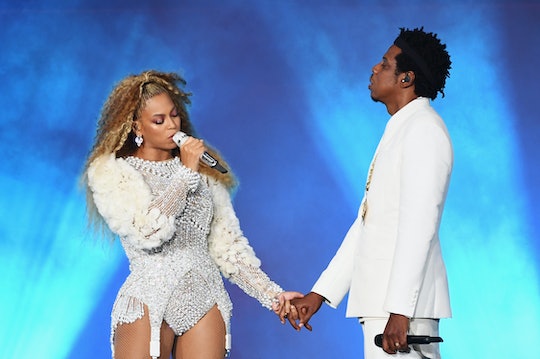 Mr. Carter is on IG and we are SOOOO happy about it!

JAY-Z is officially part of the Instagram family! On Tuesday, the rapper and media mogul joined Instagram and gained over 2 million followers in one day. He also made BEY-history when he became the first person his wife, Beyoncé, follows.

Beyoncé has 2.2 million followers on her Instagram but did not follow anyone until her husband joined this week. And vice versa, Mr. Carter followed her back. His first post, a poster of the upcoming Netflix film, The Harder They Fall, has over 644,000 likes. The Western film features an all-Black cast starring Jonathan Majors, Idris Elba, and Regina King. It tells the story of an outlaw named Nat Love who discovers that his enemy Rufus Buck, is out of prison and out for revenge.

The Hov is the producer of the film, which premiered on Nov. 3, and also wrote music for the soundtrack. JAY-Z put a countdown to the premiere of the movie on his Instagram Story, which his wife, dutifully reposted on her page.

JAY-Z, whose real name is Shawn Carter, shared with Entertainment Tonight the importance of honoring the legacy of Black cowboys, after learning one in three cowboys in the Wild West period were Black. “For years, one of the only things on public television was Westerns, every week, and we weren't represented in those at all,” Carter told ET. “In fact, our characters were taken from us. The Lone Ranger was based on one of the characters from this film.”

Tina Knowles-Lawson backed her son-in-law adding, “Black cowboys have kind of been left out of the history, and it's so important to tell his story because they played a big role... and to just acknowledge them is amazing.” Beyoncé even paid homage to the Black cowboy legacy in her latest Ivy Park collection released in August.

Carter fans gave JAY-Z a warm welcome under his post. “The GOAT is here,” one person commented. Another wrote, “Welcome to IG, Jay Z.”

JAY-Z’s Instagram debut comes just days after he was inducted into the Rock & Roll Hall of Fame on Oct. 30. Beyond keeping up with his work, perhaps his page will be another source to catch cute snaps of the Carter kids. Fingers crossed!