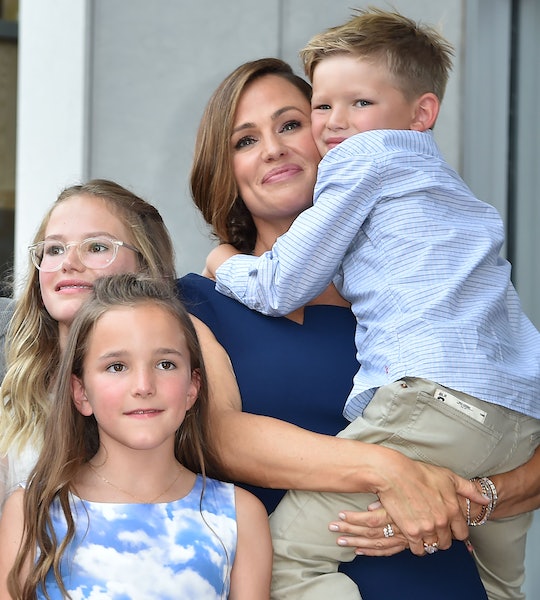 One of her kids convinced they're her #1.

If you have more than one kid, you have probably heard the question, "Who's your favorite?" I don't know why people ask this question since pretty much no parent has any intention of answering. It's obviously worse if one of your kids asks you that same question, but perhaps it's not a terrible idea to have a response ready to go if it comes up. Because you might find yourself in the same boat at Jennifer Garner, whose Instagram post about having a favorite child is as relatable as ever. One of her kids seems to have decided they know they're the favorite, and the actress' response was a sweet and perfect way to shut down that awkward conversation once and for all.

The Yes Day star is mom to three kids with ex-husband Ben Affleck, 15-year-old daughter Violet, 12-year-old daughter Seraphina, and 8-year-old son Samuel. As a mom of three, Garner presumably knows a thing or two about the particular balancing act of dividing attention and affection between her kids. But one of those kids apparently thinks that, despite her best efforts, they've figured out that she does indeed have a favorite. And they are that favorite.

On Monday, Garner shared a handwritten note from one of her kids (she doesn't say which but my money is on her youngest child Samuel because this is such a youngest kid move) that read, "P.S. I know I'm your favorite."

One of Jennifer Garner's kids is sure they're her favorite.

Her response? She harkened back to her own mom's parenting style when she shared in the caption, "As my mom always says, my favorite is the one I’m with."

Social media users commiserated with Garner's crafty way of getting out of the favorite kid trick question, with one mom noting she was able to divvy up the favoritism equally, "I always say you’re my favorite son or you’re my favorite daughter. I have one of each." Another social media user shared her own mom's response which was kind of hilarious, "My mum laughs and said she doesn't like either of us."

This isn't the first time one of Garner's kids has communicated with their mom through cryptic handwritten notes. In 2018, for instance, she was called out by daughter Seraphina as a "fun-killing" mom, although the little girl did admit she hoped to be the same kind of mom someday. In August, her son Samuel left her a note beside a "science experiment" warning her not to touch it, and the lettering looks suspiciously similar to the note about being her favorite.

Jennifer Garner might not be able to say which one of her kids is her favorite, but mine might be Samuel. He seems fun.