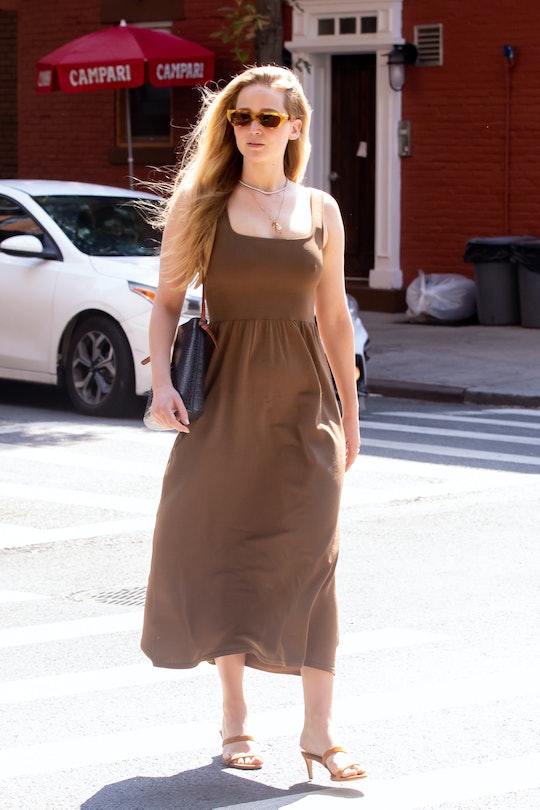 Jennifer Lawrence Reveals The Name Of Her Baby Boy

Jennifer Lawrence is not just a new mom, she’s also the stunning cover girl for the October issue of Vogue magazine. In her first interview since giving birth to a baby boy, the 32-year-old actress gushed about being a new mama and shared the artistic name she and husband Cooke Maroney chose for their bundle of joy. Welcome to the world, little Cy!

Since Lawrence’s husband is a gallery director at Gladstone Gallery in New York City, it’s no big shocker that the couple chose a name with a nod to the art world too. Lawrence shared that baby Cy is named after postwar American painter Cy Twombly, who also happens to be one of Maroney’s favorite artists.

While the the couple welcomed their son in February, and Lawrence accidentally revealed she was expecting a little boy on air to Ellen DeGeneres, this is the first time the actress has really opened up about her life as a first-time parent. In signature Jennifer Lawrence fashion, the starlet was refreshingly honest about her experience.

“It's so scary to talk about motherhood. Only because it's so different for everybody,” the actress told Vogue. “If I say, It was amazing from the start, some people will think, It wasn't amazing for me at first, and feel bad. Fortunately I have so many girlfriends who were honest. Who were like, It's scary. You might not connect right away. You might not fall in love right away. So I felt so prepared to be forgiving,” she said.

But just because Lawrence is in baby heaven, doesn’t mean she’s lost her signature, quirky sense of humor. “I remember walking with one of my best friends at, like, nine months, and being like, Everyone keeps saying that I will love my baby more than my cat. But that's not true. Maybe I'll love him as much as my cat?” Lawrence joked.

Turns out Lawrence’s cat might have some serious competition now that Cy has arrived to steal the kitty’s spotlight. “Like, now is day one of my life,” the Causeway star gushed on her new baby-raising chapter.

Like many women, Lawerence has gone back on forth on whether she wanted to be a mother in the first place. When she was in her early 20s, she seemed very clear that having a kid was in her crystal ball. "It’s so weird for a 22-year-old to say it. I do feel like the reason I was put on this Earth is to be a mother, which is why it’s funny for me to end up with such an overwhelming career. Ever since I was a baby, I was always playing house,” Lawrence said in 2012, as reported by HuffPost.

But within a few years and with her career growing at an lightning speed, the A-Lister had some different views in her 30s. When asked in an interview with E! if she was feeling any motherhood pangs as she was getting older, the actress was quick to reveal that she wasn’t. “They are actually getting less and less as I get older, which is starting to worry me. I don’t think that’s how it’s supposed to work!” Lawrence said in 2017.

But now that baby Cy is actually in Lawrence’s arms it looks like she’s has changed her tune one more time. And the lovestruck mom is all about lullabies now.