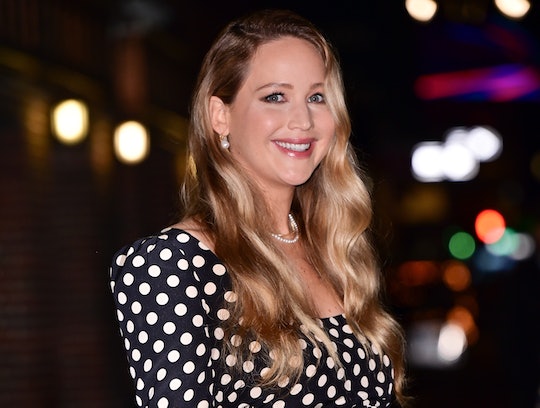 To be fair, Ellen DeGeneres let the detail slip.

Although it wasn’t a secret that actress Jennifer Lawrence recently became a first-time mom, the tight-lipped celeb confirmed the birth of her baby on the final season of The Ellen DeGeneres Show. Although the interview wasn’t in-person, Lawrence did call in as a guest. And when DeGeneres congratulated J Law on her new baby, the Oscar winner graciously thanked her famous friend and may have inadvertently revealed a big detail about her first child.

Lawrence, who slayed her maternity red-carpet fashion, welcomed her first child with husband and art dealer, Cooke Maroney, in February. The A-List actress is known for being refreshingly down-to-earth and candid, even hitting up the occasional karaoke bar with the fellow famous mom.

The Hunger Games star didn’t disappoint with her latest hilarious confession to DeGeneres either. Lawrence told the talk show host that in her pre-fame days as a teenager, she used to pretend she was being interviewed on television. But it was the location of these imaginary interviews that really got viewers laughing, as the Don’t Look Up star revealed she used to pretend to be on TV while she was sitting in a very specific place, namely — the toilet. “So pretty much any time it was a number two — it was you!” J Law told DeGeneres. “I really manifested hard on there,” she continued.

But that wasn’t even the biggest admission of the day. DeGeneres, who offered the fun fact that she used to live in the same house that Lawrence is currently living in, might have also accidentally let the cat out of the bag about the sex of Lawrence’s baby. “People don't know this, but I used to live in the house that you live in now when I started the show 20 years ago,” DeGeneres said. “Now I live next door to you, and I'm looking at you living in my house with a brand-new baby... By the way, I do hear you sometimes talking to him.”

Whoops! Notice the use of the word: him. It sure sounds like J Law is a proud mom to a baby boy.

Now, Lawrence either didn’t catch it or took the slip up in stride, as she responded to DeGeneres with a singsongy: “Awww.”

I guess the perils of having one of the most well-known talk show hosts as your next-door neighbor is that she might spill the beans of your baby business on national television. Such are the occupational hazards of being a mom in Hollywood!