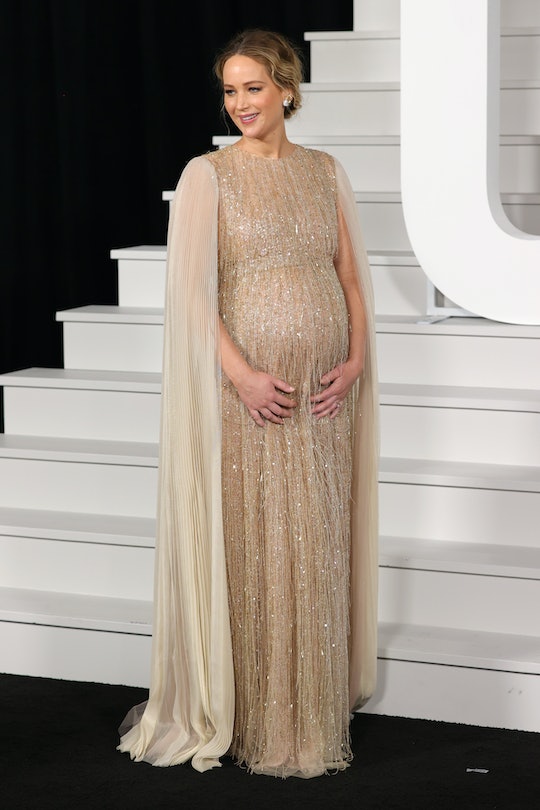 The Hunger Games actress is glowing!

Jennifer Lawrence was solid gold and glowing at the Don’t Look Up red carpet premiere in New York City. The Hunger Games actress, who is expecting her first child, dazzled in a golden, flowing gown alongside her co-stars Leonardo DiCaprio, Meryl Streep, and Jonah Hill when she stepped out for her first red carpet appearance since announcing her pregnancy.

News of Lawrence’s pregnancy with her first child with husband Cooke Maroney was first revealed in September. While a representative for couple confirmed the news to People at the time, the 31-year-old star hasn’t shared much about her pregnancy or any photos of her maternity style. Until now, that is, when she debuted her growing up on the red carpet over the weekend. Page Six reports Lawrence worn a gold gown by Dior and Tiffany & Co. Schlumberger earrings for the Don’t Look Up red carpet premiere at Lincoln Center on Dec. 5. This also marked her first red carpet appearance since the June 2019 premiere of Dark Phoenix, in which she starred as Mystique.

In an interview with Vanity Fair earlier this year, the Oscar-winning actress opened up about why she has opted to keep most details about her pregnancy under wraps. “If I was at a dinner party, and somebody was like, 'Oh, my God, you're expecting a baby,' I wouldn't be like, 'God, I can't talk about that. Get away from me, you psycho!” Lawrence explained to Vanity Fair. “But every instinct in my body wants to protect their privacy for the rest of their lives, as much as I can. I don't want anyone to feel welcome into their existence. And I feel like that just starts with not including them in this part of my work.”

Though Lawrence hasn’t revealed when her bundle of joy is due, it’s been reported that the actress’ due date could be anytime between this month and February 2022. Whenever her little one does arrive, though, we can be sure that they’ll have an instant buddy, thanks to Lawrence’s friendship with fellow celeb mom Amy Schumer. The comedian’s son Gene is only two years older, so there’s definitely an opportunity for the kids to be close like their moms!