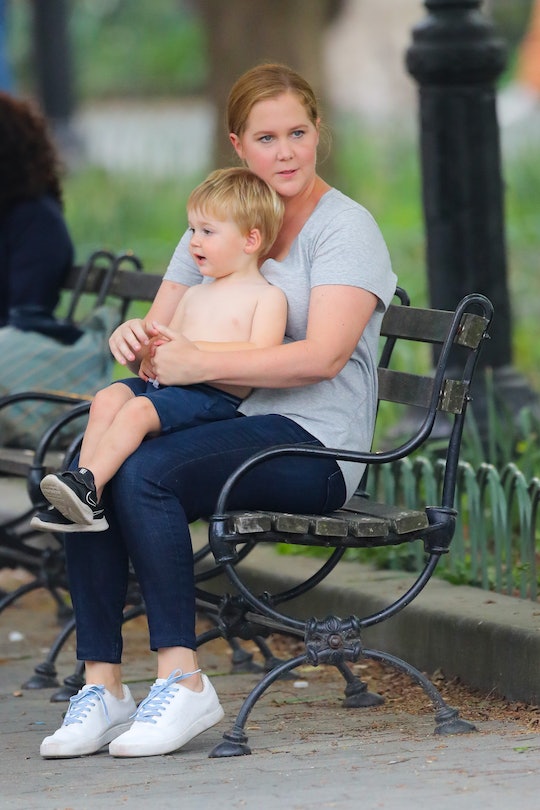 “Motherhood in a nutshell.”

Now that Amy Schumer’s son Gene is 2 years old, she’s dipping her toe into a whole new world of parenting. And, as ever, she can be relied on to share her most relatable moments with us regular moms. Like, for instance, trying to take a drink while your toddler is napping on you.

In a hilarious video on Instagram, the I Feel Pretty actress shared a sweet peek at her life with son Gene, who she shares with husband Chris Fischer. Schumer appeared to be sitting in a restaurant with Gene, who was completely passed out in her lap with his arms wrapped around her neck. Sweet, right? Absolutely. Schumer looked a bit blissed out and happy until, of course, it came time to reach for her cocktail. Trying to do so without waking her sleeping toddler meant resting her drink on Gene’s back, reaching her lips out to meet the glass in a way that was completely ineffectual.

Anything to avoid moving that sleeping kid.

Schumer tagged the post “relatable” with a laughing emoji, and other parents weighed in. “Been there. Done that. No shame,” wrote one mom, while another wrote, “Motherhood in a nutshell.”

Several celebrity moms also commented, like Nicole “Snooki” Polizzi who wrote, “We are twins.” Stassi Schroeder wrote, “THIS AND ONLY THIS,” while Alyssa Milano wrote, “Gahahahaha.”

Schumer’s life with Gene has been one big adventure since she welcomed him in May 2019, and he seems to have a pretty big personality like his mom. For instance, back in April, Schumer shared a video of Gene pulling their family dog Tati around in a little yellow school bus while wearing tap shoes and wrote, “Gene only wears his tap shoes these days.”

A little toddler running around in tap shoes is pretty cute, but imagine the noise? No wonder Schumer doesn’t want to wake Gene. Like so many other parents, she’s just improvising as she goes. Which is basically the parenting advice she gives to new parents, “you just have to live and learn,” as she shared in an interview with Seth Meyers back in February.

Live and learn to drink around the back of your sleeping toddler lest he wake up and want to do a little tap-dancing number for the afternoon. That’s more like it.