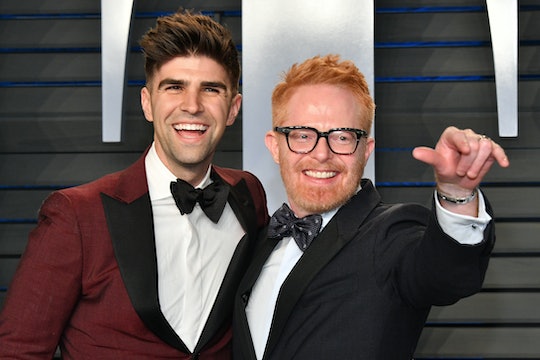 “So you know, we’re raising him gay until he decides to be straight.”

It’s not healthy to be jealous of a baby, but when Jesse Tyler Ferguson said he’s raising his son Beckett on “show tunes,” along with some Britney Spears and, oh yes, gifts from Taylor Swift... okay, you could say I was jealous. That life sounds pretty marvelous for an 8-month-old baby.

The Modern Family star welcomed Beckett with husband Justin Mikita in July 2020, telling the world via a statement from their rep, “Jesse and Justin welcomed their little bundle of joy Beckett Mercer Ferguson-Mikita on July 7, 2020. The new parents are overjoyed and excited for this new journey as a family of three."

On Wednesday, the proud dad gave Ellen DeGeneres an update during a remote interview on The Ellen Show. “We’re still figuring out his personality. This is the funny thing about kids that they don’t tell you,” he said. “It’s a new person in your life, and just like anyone else that comes into your life, you’ve got to figure out if you like them.”

Don’t worry, Ferguson said he likes Beckett. So much so that he sings to him. “It’s a lot of show tunes, because that’s what I like,” he said on Ellen. “So you know, we’re raising him gay until he decides to be straight.” Despite his grand plans, Ferguson said he and his husband “can tell he’ll be like such a straight kid.” But he promises to love him no matter what.

It’s not just show tunes for Beckett, however. “On the way back from the hospital, we played Britney Spears,” Ferguson shared. “Because that was what Justin demanded to listen to. That was his first exposure to music.”

Beckett’s exposure to great music doesn’t begin and end at Britney Spears, by the way. Ferguson said he’s “writing a lot of songs” for his son. And oh yes, Beckett also has some outfits given to him by Taylor Swift. “She sent a big care package” full of baby clothes, Ferguson told DeGeneres, “and it’s like the nicest baby clothes I’ve ever seen.” They clothes are so nice that Beckett’s dads are still stuffing him into the outfits even though he’s gotten too big for them. “This is what Taylor Swift got you so you’re just going to have to enjoy this,” Ferguson joked.

Ferguson seems to be enjoying pretty much everything about parenting. As he told People last October, he and Mikita are even starting to think about Baby #2. “It's never too soon, I guess. It feels like we're in the thick of it right now,” he told the magazine. “The idea of starting the process again is a little intimidating. But, you know, if we want to do another one, I'm 45, so tick-tock — we gotta get this going if we're doing another one!”

Besides, someone has to wear Beckett’s hand-me-downs from Taylor Swift. That’s reason enough to give him a little brother or sister.