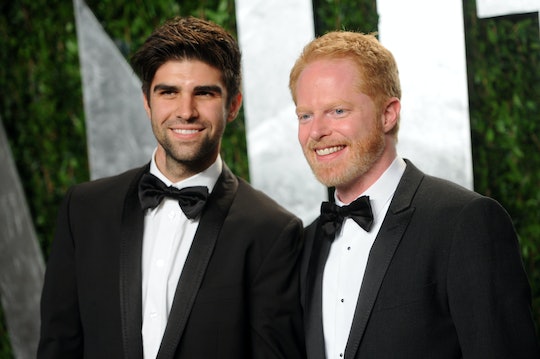 His name has a Broadway twist.

Jesse Tyler Ferguson and Justin Mikita are about to find themselves a whole lot busier as parents. The couple just welcomed their second baby boy, making 2-year-old son Beckett a big brother. Ferguson took to Instagram to explain his brief absence from his Tony-nominated Broadway show, Take Me Out, with just about the best reason possible, the arrival of his newborn son, whose name might even have a bit of a Broadway inspiration behind it.

“Sad to be away from my @takemeoutbway fam tonight but we ran off to welcome our newest little one, Sullivan Louis Ferguson-Mikita,” the proud dad wrote on Instagram on Tuesday, adding a sweet shoutout to the doctor who helped “us grow our family & our incredible surrogate and all of the nurses and doctors.”

“We are overjoyed to be a family of four,” he added.

While he didn’t share the inspiration behind his son’s name, Sullivan Louis, there absolutely could be a bit of a Broadway nod with that whole Gilbert and Sullivan theme. Little Sullivan is already a Broadway baby right out of the gate, wearing an Empires onesie from his dad’s Broadway show for his first official photo. Perfect.

The Modern Family star first announced that he and his husband were expecting their second baby back in May with an Instagram video and a message reading, “and I have some exciting news, we’re expecting number 2! Our growing family will be a family of four later this fall! We are so excited for Beckett to have a sibling.” Now Sullivan is here, and Beckett can enjoy his new role as big brother. And potentially introduce him to show tunes.

The couple welcomed Beckett Mercer in July 2020 and have been “raising him on show tunes” right out of the gate, Ferguson told Ellen DeGeneres. “It’s a lot of show tunes, because that’s what I like,” he said on Ellen. “So you know, we’re raising him gay until he decides to be straight.” The commitment to Broadway is strong in this household. When Beckett turned 2 years old in July his proud dad shared a photo of him flipping through a playbill for his Broadway show with the message, “You arrived into this world 2 years ago today and my life changed forever. My greatest joy is being your papa. I love you. Happy Birthday!”

What a happy, musical, inspiring household Beckett and Sullivan will grow up in. Lucky them.