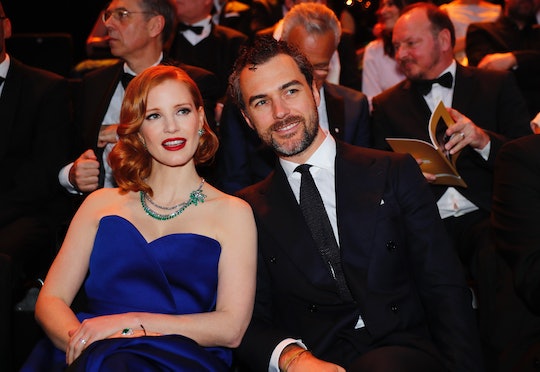 The actress is fiercely private about her husband and children.

When Jessica Chastain found out that her stunning performance as late televangelist Tammy Faye Bakker in The Eyes of Tammy Faye won her a Best Actress Oscar nomination, she did something not every actor would do. She reached out to every other nominee individually to congratulate them, and even sent them flowers. Perhaps it’s not so surprising when you consider how Chastain feels about her contemporaries, and why it was so important for her to make The Eyes of Tammy Faye (which she also produced).

As expressive and vulnerable as Chastain is known for being onscreen, she’s as fiercely private offscreen. We know that she has a family, but Chastain keeps the details closely guarded.

Jessica Chastain is married to an Italian count.

Chastain and Gian Luca Passi de Prepoluso were wed on June 10, 2017, in a private ceremony at Passi de Prepoluso’s family estate in Treviso, Italy, located “about 20 minutes outside of Venice,” according to Parade.

Chastain told Kelly Ripa that she met Passi de Prepoluso in Paris when she was persuaded to go to a fashion show on the same day she was nominated for a Best Supporting Actress Oscar for her role in The Help. “It’s probably the best day I ever had… It was the beginning of my career and then I met my future husband.”

Their wedding guest list reportedly included such notables as Anne Hathaway and Emily Blunt, and Octavia Spencer (who was not able to attend), shared the following photo of Chastain in her gown.

Here’s a pic of them enjoying a date night at the premiere of her film The Eyes of Tammy Faye.

Does Jessica Chastain have children?

Chastain and Passi de Prepoluso welcomed daughter Giulietta Chastain Passi in April 2018 via surrogate, according to E!. While she has yet to share pictures of her daughter’s face, Chastain did share the following photo of her little one reaching for a gorgeous jewel with the caption “You’ve got good taste, kid,” in December 2018.

In March 2020, Chastain and her husband were seen walking with one child in a stroller, pushed by Passi de Prepoluso and a baby in a carrier (strapped to Chastain’s chest), prompting Page Six to report it “appeared” the couple “may” be parents of two. At the time of this writing, however, the child’s existence has yet to be confirmed.

Jessica Chastain has been praised for her support of working moms

As the producer and star of the film 335, Chastain was adamant about creating an environment where parents felt supported, and the set had a trailer just for children, according to People.

“I love bringing families on set,” Chastain said. “We had a trailer that was for children, and so how wonderful that, yes we can be successful and wonderful at our work, but we can also not have to shut down part of our life in order to do so.”

“And I think for the longest time it's been like, you're either a career woman or you're home. It's like, there's no such thing,” she added. “Men have been able to do both for years. Let's just make it possible for everyone.”

More Like This
Kate Middleton Explains Why Her Kids Couldn't Attend The Top Gun: Maverick Premiere
Zac Efron Was Asked If He Wants Kids & His Hilarious One-Word Answer Says It All
Sarah Levy Revealed She's Pregnant & Got A Very Schitt's Creek Response From Brother Dan
Michelle Williams Is Going To Be A Mom Of 3!