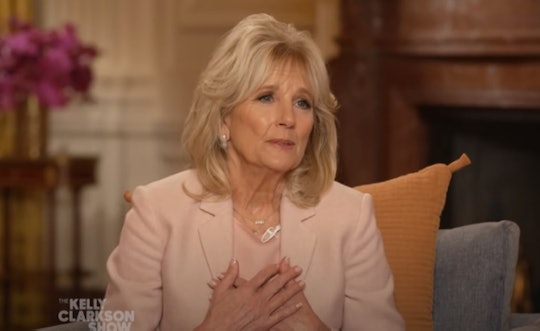 "Over time you heal."

Trying to navigate a divorce is difficult. And confusing. And emotional. Sometimes a person needs a little help seeing the light at the end of the tunnel, and this is why everyone should listen to Dr. Jill Biden's advice to Kelly Clarkson on divorce, offering some guidance on it all.

Clarkson filed for divorce from her husband Brandon Blackstock in June 2020 after nearly seven years of marriage. She and Blackstock share two children together, 6-year-old daughter River Rose and 4-year-old son Remington, and Clarkson was stepmom to Blackstock's two teenage children from a previous marriage. The "Since You've Been Gone" singer sat down with the first lady for her first in-person interview since entering the White House in January, and the two moms almost immediately got personal. During her appearance on The Kelly Clarkson Show, Biden spoke to Clarkson about her recent divorce and shared some hopeful words with her.

"This is what I would say to you if I were your mother," Biden said. "My mother always said to me 'Things are going to look better tomorrow. And if you can take one day at a time, and things will get better."

Biden herself went through a divorce in 1975 with first husband Bill Stevenson before marrying President Joe Biden in 1977, and she told Clarkson she really struggled with it at the time. "I didn’t know anybody who had been divorced," she said. "I felt like it was a failure on my part. I lost my self esteem because I kept thinking, ‘What’s wrong with me, why couldn’t I make this work?'”

Now she looks back with a different perspective. "If I hadn't gotten divorced, I wouldn't have met Joe," Biden told Clarkson. "I wouldn't have the beautiful family I have now. So I really think things happen for the best. And I think, Kelly, over time you heal, and you're gonna be surprised. And I can't wait til that day comes for you."

Clarkson spoke to Entertainment Tonight in October about her own difficult transition from married to separated, explaining that she wanted to be careful when talking about her divorce. "There's a lot of hearts involved here," the singer shared at the time. "And you know, that's the thing that's been kind of hard to navigate is I am an open book, but at some point I'm a mama bear more than I am a person in the public eye."

Dr. Biden was not a mother when she was divorced, but she certainly knows a little something about living in the public eye. Hopefully her advice to Clarkson to just take things "one day at a time" will help the busy mom. And anyone else who was watching.