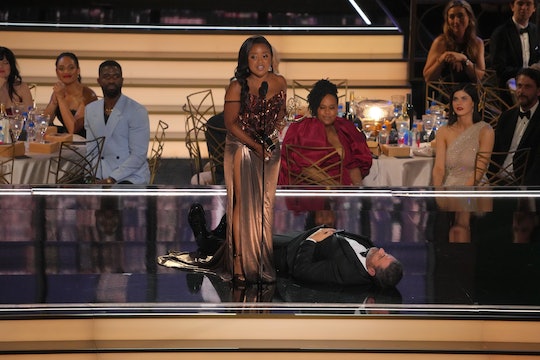 When Quinta Brunson won her first Emmy for Outstanding Writing for Abbott Elementary on Monday night, she was forced to give her acceptance speech while standing over Jimmy Kimmel. It seems the talk show host was very committed to a joke about being “dead” because he lost in his own category. And honestly, no one was impressed with him for taking attention away from Brunson during her big moment.

Kimmel was meant to present the award for Outstanding Writing in a Comedy Series alongside fellow presenter Will Arnett, but instead decided to get dragged out by Arnett as a gag. Arnett explained that Kimmel was unable to present because he was upset that he didn’t win his own Emmy, which would have presumably been perfectly fine as a quick joke. But when he decided to lay there, unmoving, even when Brunson took to the stage to accept her award, social media took umbrage with his decision.

Perhaps especially when Brunson had to step over his body and said to him with a smile, “Jimmy, get up. I won.” He remained unmoved. And Twitter was unimpressed. “I’m gonna need Jimmy Kimmel to get his a** up and stop trying to take Quinta’s shine.”

This person pointed out that Kimmel would forever be in all of Brunson’s photos from her Emmy acceptance speech.

This social media user called out Kimmel, an established white male celebrity who took attention away from a young Black female newcomer, for being “disrespectful.”

Many, many people found the entire bit disrespectful and “irritating.” Especially as it took attention away from Brunson’s first Emmy.

This social media user thought Kimmel’s decision to lay on the ground throughout Brunson’s entire speech was an “example of invasive white male privilege.”

This person called for a speech do-over for Quinta Brunson.

Kimmel’s decision to not just play “dead” but stay “dead” on stage during Brunson’s speech was addressed in a post-Emmys interview by the woman herself, who told Variety that “the bit didn’t bother me that much” before going on to say “tomorrow maybe I’ll be mad at him.”

The two will have an opportunity to discuss on Wednesday when Brunson is scheduled to be a guest on Late Night with Jimmy Kimmel, where Brunson jokingly said that “maybe she’ll punch him in the face.”

Kimmel himself has yet to respond to the outrage over his performance. Maybe he’s still playing dead backstage.

More Like This
Jimmy Kimmel Apologized To Quinta Brunson For His "Dumb Comedy Bit" At The Emmys
Quinta Brunson Got A Sweet Card From A Kid On Abbott Elementary After Her Emmy Win
'Squid Game' Is Coming Back For Season 2 On Netflix: Here’s What Parents Need To Know
Exclusive: Watch Hayden Panettiere Talk About Addiction Treatment 4 Months Postpartum