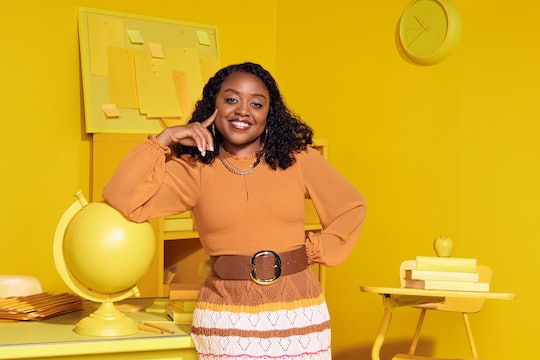 “When you're the child of a teacher, you get to see teachers — behind the scenes.”

Quinta Brunson is a true mama’s girl. Her mother, Norma Jean Brunson, not only has a special place in her daughter’s heart but is also the prime inspiration for Brunson’s hit, Emmy-winning mockumentary series, Abbott Elementary.

As one of TIME’s most influential people of 2022, and an Emmy winner, Brunson has been a beacon of inspiration for many, but her personal source of influence is close to home. As we prepare ourselves for the premiere of the new season of Abbott Elementary, here’s what you need to know about Brunson’s inspiration behind the comedy and her sweet relationship with her mom.

Although Brunson wrote the popular ABC series as a comedy, Abbott Elementary is a sentimental homage to the Black and brown teachers who trek inner city school halls each and every day. One of those educational trailblazers happens to be Brunson’s mother. Brunson has previously shared that Abbott was inspired by her mother’s real-life teacher struggles; Norma worked as a kindergarten teacher in West Philadelphia.

During an appearance on the Kelly Clarkson Show back in February, she spoke about watching the hardships of her mother and other teachers from challenging administration to advocating for their students’ welfare. “That was my mom every night,” Brunson said. “And when you're the child of a teacher, you get to see teachers — behind the scenes.”

The Black Lady Sketch Show star went on to discuss her daily routine with her mom growing up as a teacher. “I was in my mother's class, her kindergarten class. I was in her class and I went to the same school where she taught for like six years, including kindergarten. So I rode to school with her, rode home with her, watched her work more at home. It's just getting such a different view. And I really credit my mom's experience for helping me to create the show.”

She later shared with ABC in March about hearing of “every student and every decision the school district was making or a principal that was going to make her [mom’s] job a little bit harder that year.” Needless to say, Ms. Norma played a very influential part in Abbott Elementary and, undoubtedly, its success.

That inspiration from watching her mom led to an Emmy.

On Monday night, Brunson won her very first Emmy for Outstanding Writing for a Comedy Series for the episode, “Pilot.” It was an amazing moment, and a long time coming. “I want to say thank you to ABC, Disney, Fox, and Warner Brothers. I need to say thank you to Justin and Patrick, my co-showrunners,” she said during her speech.

“In case I’m not back up here again, I have to thank my mom, my dad, my brothers and sisters,” Brunson added, going on to give a shout-out to her aunts, uncles, cousins, and her husband, Kevin Jay Anik.

Her mom was “surprised” by how much she observed during her childhood.

Brunson recalled the exact moments to Deadline that spearheaded her inspiration to create Abbott Elementary. “I was looking at my mom sitting at her desk and she was having a parent-teacher conference,” she recalled in a June 2022 Q&A with the outlet. “And it was the year before she was about to retire. And I felt it. I felt like, Wow, I feel like a mockumentary-style camera right now because I’m in this room, but I’m not a part of what’s happening, I’m just watching it. But I’m in this room physically and I wanted the audience to feel that way too. And I think that has a lot to do with how we feel about the humor of Abbott.”

She added that her mom was surprised by how much her daughter observed her growing up. “My mom is even surprised about how much I had taken in because when she sees the shows, she’s can’t believe certain things that are in it because she hadn’t realized I was paying that much attention,” she told Deadline. Hence the lesson, children are always watching — and listening.

Ms. Norma approves of the show.

Not only is Norma one of the main inspirations of Abbott Elementary, but she also approves of the show! Brunson told ABC that her mom gave the sitcom an A+. “I think she enjoying the show,” she said. “My mom's a sitcom watcher. You know, her my dad they’re TV watchers... and I think it's really cool because they're watching Abbot almost as if I'm not their daughter. They're just, it's another show for them to enjoy.”

Her mom thought she was stripping at one point.

True story! However, these days Ms. Norma seems to understand what her daughter does for a living. “At [one] point I was making like, really good money working at BuzzFeed,” Brunson told ABC, recalling the time she worked at the entertainment outlet. “And my mom just didn't know what BuzzFeed was. So she was like, are you stripping? How are you paying for everything? So this is a very concrete thing that is understandable to the whole family.”

Season 2 of Abbott Elementary premieres Sept. 21 on ABC and Brunson’s mom will certainly be watching the premiere with the rest of us. Especially after that Emmy win.

This article was originally published on Sep. 10, 2022