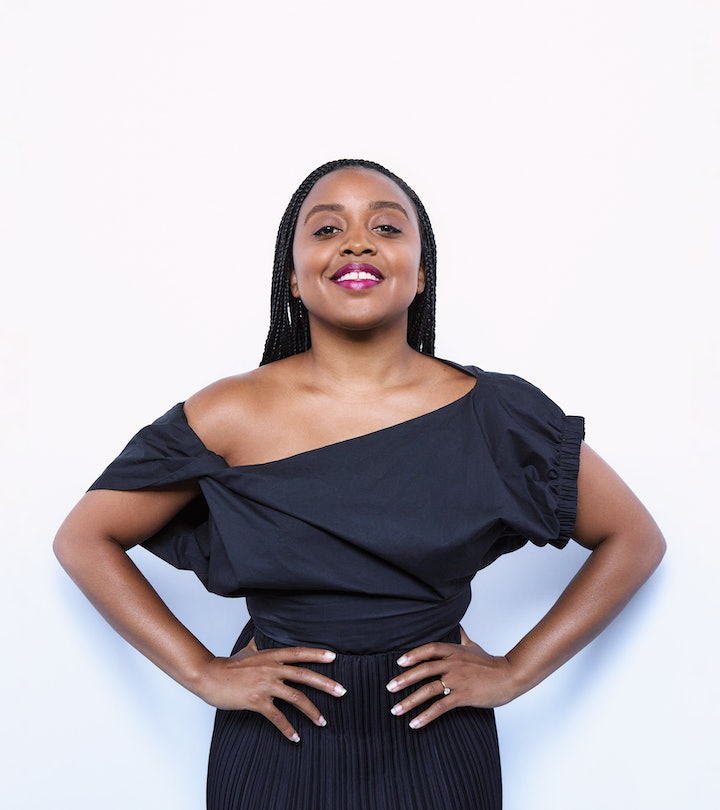 Photo courtesy of The Riker Brothers

The creator and star reveals to Romper that Season 2 will give us “more insight on what a teacher's day-to-day is like.”

While schools are a common setting for sitcoms, they rarely depict experiences anything like actual schools. The wacky hijinks of Saved by the Bell, the high drama of Degrassi, the uniformly super-model looking student body of 90210: Fun? Yes. Accurate? Not at all. Enter Abbott Elementary. Creator, writer, and star Quinta Brunson turned her own experiences growing up in the Philadelphia school system into the mockumentary-style series that currently reigns as the #1 sitcom on ABC, proving that authenticity can be entertaining. And now, through her partnership with Box Tops for Education, Brunson has helped that success come full circle by making a donation of $20,000 in box tops to Andrew Hamilton Middle School in Philadelphia, her alma mater and one of the places that inspired Abbott.

It would be easy for Abbott Elementary to be a drama. Set in an underfunded, Philadelphia school, Abbott is plagued with high turnover and egregious administrative mismanagement, to say nothing of crumbling physical infrastructure. And yet, as the embattled teachers note, for many children, this is their one safe space. The series does not hide these realities, and yet what emerges is thoroughly watchable, laugh-out-loud series, praised by critics and fans for its ability to balance humor and heart. It’s a balance Brunson is mindful of, and remains aware of not crossing certain lines.

“If there's something that in the writer's room we just don't feel good about and it doesn't feel funny, then we just don't even attempt to try to make that kind of a thing funny, and I think remembering that line is really important,” Brunson tells Romper. “We're not in the business of trying to turn something into a laughable situation. We're more about, ‘Okay, we can find the funny in this in a very organic way.’”

Abbott Elementary has been praised by critics and viewers as hilarious and heartwarming.

Of course, inadequate facilities for students and staff aren’t funny on a grand scale (though we can all see the humor in a toilet that shoots water at unsuspecting flushers). And for those schools, Brunson recognizes the difference that a program like Box Tops for Education can make.

“I think this is an incredible initiative,” she says, “anyone can participate.” Shoppers that download the Box Tops for Education app and enter code “TeachersMakeUsBetter” during registration can earn $5 for their school of choice when they scan a receipt. “$5 may not seem like a lot, but that can go such a long way from so many different people,” Brunson notes.

Teachers, of course, make a difference in the lives of their students and, on Abbott, the drama of the series focuses around the lives of the various teachers — in particular, Brunson’s Janine Teague, a relatively new teacher whose optimism has not yet been jaded by years in the profession. Brunson says it was her mother, a Philadelphia kindergarten teacher, who initially inspired the series by giving her a “behind-the-scenes” view of the district she herself went through growing up. That authenticity has resonated with teachers IRL, who have praised the show for just how much of themselves they can see in the series.

“The main response has been that they love it, which is incredible,” Brunson says. On the other hand, she notes that for some, watching a show that frankly depicts the struggles of schools and teachers — particularly after years of a pandemic, remote teaching, and struggles the likes of which the profession has never seen before — can be more than they care to handle after hours. “I respect that too,” Brunson says. “Absolutely. It's a lot going on. Teaching is not the easiest job and I totally understand if someone's like, ‘I'm not ready to watch that show yet.’”

While the action is told from the perspective of the educators, it was Brunson’s own perspective as a student that informed much of the tone of the show.

“Harnessing the feeling of what it feels like to be a Philadelphia public school student, I think a lot of that is just as much in the show as my mom's experience,” she says. “That feeling helped to build the school and the tone of the show and the way it's lit and the way it feels. I think that all came from the feelings of being a student there.”

Conveying that element of the show is up to the large co-hort of child actors who round out the cast of Abbott. Of course, as anyone who’s ever tried it can attest, getting even one child to do what they’re supposed to do on camera can be a challenge But Brunson assures Romper her young cast mates are pros.

“They're still kids so there are times when they have their moments and they get a little silly and a little restless,” she says, “but for the most part, they're actually really great.” Of course, she admits that it helps to be one of a minority of adults in the room... especially one who looks and acts like a teacher for most of the day.

“A lot of the kids kind of act as if they're in school and kind of look at us as real teachers,” she says. “And that helps us to kind of be able to tell them to stay calm or quiet and it's very helpful.”

A second season was confirmed in March, before the first season ended, and Brunson is excited to tell new and unexpected stories.

“In the first season, it was important to me to kind of think outside of the box for what people have seen with teachers or school shows already, then go a little bit deeper than that and really figure out what else is going on that audiences haven't seen yet,” she says. “And I'm excited to do more of those: episodes people won't be expecting, that will give them more insight on what a teacher's day-to-day is like.”

More Like This
Catherine Reitman Calls It Like She Sees It: “Being A Working Mother Is Impossible”
Janet Jackson's Son Eissa Is A Little Musical Prodigy In The Making
Ciara’s Kids Make The Sweetest Cameo In Her New Song “Treat”
Sarah Michelle Gellar Is Facing A Terrifying Parenting Milestone: Sleep Away Camp